Viola Davis accepts Outstanding Lead Actress in a Drama Series award for How to Get Away with Murder onstage during the 67th Annual Primetime Emmy Awards on Sept. 20, 2015 in Los Angeles, California.
FOX/Getty Images
Ideas
By Kareem Abdul-Jabbar
Abdul-Jabbar is a six-time NBA champion and league Most Valuable Player. He is the author of the new book, Writings on the Wall.

Last week, Cheryl Boone Isaacs, the first African-American woman to head the Academy of Motion Picture Arts and Sciences, finally responded to last winter’s critical hashtag, #OscarsSoWhite, by admitting the criticism was positive. “It is now a global discussion… at the top of everybody’s mind, not just the Academy’s.” Then, just a few days ago, the trailer for Star Wars VII prompted a backlash over too much diversity. “If white people aren’t wanted in Star Wars,” complained one protestor under the #BoycottStarWarsVII hashtag, “then our money must not be either.” And paralleling the race controversy is the gender one: Jennifer Lawrence just published an essay advocating equal pay, which Bradley Cooper supported by announcing he would now reveal his salary to female actors before they signed a contract to be in the same film with him. When Cooper and Lawrence’s American Hustle co-star Jeremy Renner was asked if he would follow Cooper’s actions, he said, “That’s not my job.” Actually, it’s all of our jobs to fight discrimination. I’m surprised at the profound silence from other male actors, who should all rush to stand with Cooper. As Edmund Burke said, “The only thing necessary for the triumph of evil is for good men to do nothing.”

The struggle for racial and gender parity in America can be summed up in two exquisite lines from Robert Browning’s poem, “Andrea del Sarto”: “A man’s reach should exceed his grasp, Or what’s a heaven for?” It’s appropriate that these lines have been quoted so often in pop culture—from The Prestige to The Starter Wife to Star Trek—because it reflects not only America’s approach to diversity in hiring practices, but Hollywood’s. Though the quote inspires us to reach for the unreachable star it also advises us to settle for an imagined place of equality, maybe far into the future or someplace we migrate to after we’re dead. But that’s just not good enough. When it comes to providing equal opportunity to thrive, Americans must grasp in the here and now—Or what’s a Constitution for?

Hollywood’s commitment to diversity has been applauded in the last couple month based largely on two events. First, for five weeks in a row in August and September of this year, films featuring African-Americans dominated the box office. Then, Viola Davis became the first black woman to win an Emmy as lead actress in a drama for her role in How to Get Away with Murder. But these two events don’t actually reflect much progress. They are illusions—the kind of reality-bending special effect that Hollywood is so good at. Just because you think you are seeing more people of color, more women, more LGBT characters, it doesn’t mean the industry is actually diversifying. When we pull back the curtain, the Great and Powerful Hollywood is mostly business as usual. White male business.

Viola Davis winning an Emmy, which she richly deserved, is part of an Obama effect. When Barack Obama was elected America’s first black president, much of the country celebrated that a major obstacle to racial equality had been destroyed. Dr. King’s dream was rekindled in the imagination of every American who felt hopeful that the fair treatment promised by the Constitution was finally within reach, and it felt like the beginning of actively eliminating disparity. Americans would become like bomb-locating dogs, sniffing out the archaic, lunkheaded notions of racism and barking at them until they were dismantled and made harmless. Man, it was an inspiring moment in history.

Though the country gave itself a well-earned pat on the back for electing a black man to the presidency, the systemic racism in the country seemed to get worse. It was as if some people figured, “We just proved we’re not racist by electing Obama, now we’re free to continue to deny equal education, job opportunities, voter access, and whatever else is on our agenda.” The police shootings of unarmed black men and women escalated, protests ensued. A New York Times/CBS News poll in July revealed that 68% of blacks think race relations in the U.S. are bad, more than double the percentage who thought that immediately after Obama was elected. It was as if President Obama had become that one black friend that some white people like to claim as proof they aren’t racist.

Giving Davis the Emmy is Hollywood’s version of electing Obama. “See,” they’re saying, “we’re as diverse as a Benetton ad.” The irony is, Davis’s Emmy-worthy performance was as much a larger comment on diversity itself as it was stellar acting. The two minutes when she first removes her eyelashes, makeup and, finally, wig, as if it was a battle-scarred gladiator’s helmet, to reveal her vulnerable self as a woman and an African-American are emotionally moving and powerful social commentary. That was television at its best: entertaining, illuminating, daring, and socially responsible.

In her acceptance speech, Davis said, “The only thing that separates women of color from anyone else is opportunity. You cannot win an Emmy for roles that are simply not there.” Her comment isn’t just about women of color in Hollywood, though, it’s about all people of color, women, seniors, the LGBT community, and others who are marginalized.

The true nature of this marginalization was highlighted on HBO’s Project Greenlight recently. The show held a contest to select a director who would be given money to make a film, and then followed through the grueling process. Matt Damon, who is one of the creator-producers along with Ben Affleck, argued with another producer, Effie Brown, about the final selection. Brown, an African-American woman who has produced 17 films, rightfully suggested that whoever they select to direct have some sensitivity in portraying the film’s only black character. Damon responded: “When we’re talking about diversity. You do it in the casting of the film….” Of course, there was backlash that accused Damon of wanting to maintain whites behind the camera while giving the illusion of diversity by showing black faces on the screen. That is the true problem with diversity in Hollywood. But it wasn’t really what Damon meant. He was saying that because they were selecting among finalists, it was already too late in the competition to make diversity a criteria for selection. He was right. If diversity were factored in, the contest should have made that clear, as HBO did with HBOAccess Writing Fellowships launched in March to help emerging writers with diverse backgrounds. (HBO Sports will air a documentary about me, Minority of One, on Nov. 3). According to a Writers Guild of America report, the number of minority writers actually declined last year, to 13.7 percent. And according to a University of Southern California study, from 2002 to 2014, women directed only 4.1% of the top grossing films.

Hollywood is the face of America to much of the world. Other cultures learn about us from what they see in our movies and television shows. And Hollywood has been creating roles of true substance for minorities, women, and other marginalized groups. For that, the industry should be applauded, and encouraged to do more. But if they want to achieve true diversity—and we don’t yet know if they do—that must happen not only in front of but behind the cameras, with writers, directors, producers, and others. They need to show they value those voices and stories in the larger culture. It’s a star, I think, within their grasp. 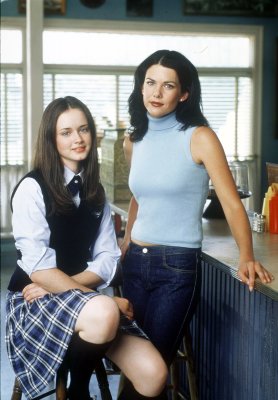 What Gilmore Girls Would Have to Do to Stay Relevant
Next Up: Editor's Pick