Philadelphia Residents Could Win $10,000 for Voting

One lucky Philadelphia resident could win a $10,000 payday just for casting a ballot in the mayor’s race.

Non-profit media organization the Philadelphia Citizen announced Thursday that a random voter will be selected on election day to win $10,000 just for voting. The lottery is sponsored by the Pamela and Ajay Raju Foundation, and is meant to encourage voter turnout in a city that has seen very low voter turnout in the last few years. The Mayoral election in 2007 brought out only 29% of eligible voters, the paper said, and only 27% voted in the primary this year.

Noting that voter turnout rates are down across the country—the 2014 federal election brought out only 36% of registered voters—the Citizen calls out Philadelphia in particular for having low civic participation. “It is especially galling here, where this country started and where every single one of us knows a myriad of problems that need solving,” the paper wrote. “Philadelphia suffers from chronic civic participation malaise. We could, as usual, stand back and wring our hands. Instead, we at The Citizen have decided it’s time for action.” Any voter is eligible to win, regardless of which candidate they select. The Citizen will select a specific polling location and a specific time, and the first voter to exit that station at that time will be the winner

While not technically illegal, paying for votes is controversial. Last year Los Angeles decided to look into cash incentives for voting, but the city council ultimately chose to drop the proposal, opting instead to pursue changing the election schedule to better accommodate voters. According to a 2013 study by Fordham University professor Costas Panagopoulos published in the Journal of Politics, small incentives don’t really change voters’ minds, but voter turnout can dramatically increase if there is more money on the table. Panagopoulos found that mailing voters $2 barely increased their likelihood to vote, but mailing them $10 or $25 made them significantly more likely to turn up at the poles. But he also wrote that lottery incentives, like the $1 million lottery proposed in Arizona in 2006 but rejected by voters, likely wouldn’t work because it ends up amounting to only 50 cents per voter.

It’s illegal under federal law to pay for turnout when there is a federal candidate on the ballot, but when there’s no federal candidate the election rules are up to the state, explains Richard L. Hasen, a professor at U.C. Irvine School of Law specializing in election law. Further, Pennsylvania’s bribery statute only outlaws payments for voting for a particular candidate, not payment for voting in general, according to Adam Bonin, a Philadelphia lawyer who specializes in campaign law compliance, meaning the Citizen should be fine on legal grounds.

What about that famous “I Voted” sticker, given out as a reward for punching your ballot nationwide? While it’s illegal to provide incentives for voting in federal elections, those stickers are allowed because they’re considered too minor to truly incentivize anything. “You’re not voting because you can get a sticker out of it,” says Bonin. “But it is illegal to say, ‘come in with your ‘I Voted’ sticker and Starbucks will give you a free coffee.”

The Philadelphia Citizen acknowledges that even though the lottery is “kinda icky,” voting is so important that “desperate times call for desperate measures.” 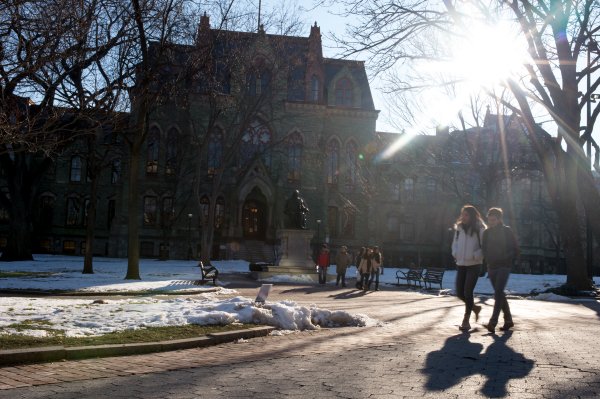 Philadelphia On Alert After 'Threat of Violence' at Area University
Next Up: Editor's Pick