The reel of black-and-white footage from 1913 is still gruesome today: a suffragette is knocked down by a horse speeding down a race track. The suffragette’s name was Emily Davison, and she died from her injuries a few days later. Though history isn’t clear on whether her death was suicide, the image is one of the most dramatic from a period of British women’s militancy in their fight to get the vote. They broke windows, threw rocks, burned post offices and cut telephone wires. They were dragged through the streets by the police. They starved themselves in prison and endured physically brutal force feedings, which were depicted with morbid fascination on the pages of British newspapers.

The British suffrage movement’s militancy in this period is the subject of the new film Suffragette, which opens in American theaters on Friday and stars Carey Mulligan. Though the film is about the British movement, American audiences will, in a certain way, be learning about their own suffrage movement, which imported its strain of civil disobedience from the Brits.

The British suffrage movement wasn’t always so violent. The National Union of Women’s Suffrage Societies, formed in 1897 and led by privileged widow Millicent Garrett Fawsett, campaigned for the women’s vote through peaceful means like penning letters to members of parliament and joining committees. But in 1903, frustrated with the lack of progress achieved by peaceful advocacy, Emmeline Pankurst — depicted by Meryl Streep in Suffragette — formed the Women’s Social and Political Union under the slogan “Deeds, Not Words,” with the hope of taking more aggressive action. Pankhurst’s organization created a sisterhood of women who used civil disobedience to great effect.

“When Emmeline Pankhurst got carried away by a giant cop in London, she knew what she was doing,” says Ellen Dubois, a professor of history at UCLA and an expert on suffrage, speaking of the militants’ ability to use publicity to their advantage. Rather than fight the conventional wisdom that women were fragile and needed protection, Pankhurst and her comrades took advantage of those attitudes to capture the public’s attention with images of the brutality they faced.

Such tactics might have remained largely confined to Britain if Alice Paul, a Quaker American from New Jersey, hadn’t traveled to study social work in Birmingham in 1907. After stumbling across Christabel Pankhurst, Emmeline’s daughter, speaking about suffrage, Paul joined the movement in Britain. She returned home radicalized in 1910. Like Pankhurst, Paul split from a more staid women’s organization in the U.S. to form her own National Women’s Party, and used the tactics of civil disobedience she’d learned from the British.

Paul’s borrowing of tactics was consistent with the strong communication between women’s movements of the period. Women’s suffrage happened at mostly the same time in European countries, the U.S., New Zealand, and Australia, says Karen Offen, an expert in comparative and women’s history at Stanford. The International Women’s Suffrage Alliance, founded in 1904, offered women from many countries a platform to discuss their respective movements. But none of the movements were as large, or quite as similar, as the American and British movements. Historians say they benefited from favorable association laws and an active press that didn’t exist in countries like France. Adds UCLA’s Dubois: “These two groups — the British and American — came together in the international imagination and created an Anglo-American pattern for suffrage activism. Their courage, or lack of pragmatism, became very influential and was imitated around the world.”

Pankhurst herself traveled to the U.S. to speak and to raise money from Americans eager to give to the cause of women’s suffrage. “Part of her charm was that she was petite. She looks like a vicar’s wife standing there about to pour a cup of tea. She was gentile and demure but once she opened her mouth and spoke, she was radical. It was this disjuncture between how she looked and her radical discourse, which fascinated Americans,” says June Purvis, a biographer of Pankhurst, who consulted on the making of Suffragette.

For all their similarities, the American and British suffrage movements did have their differences. In the U.S., for example, before women eventually pursued the constitutional amendment that passed in 1920, many believed that the best strategy was to get the vote in states one by one. In Britain, by contrast, the campaign was more singularly focused on the parliamentary vote.

Racial and class dynamics also differed between the two countries. The America women’s movement was not immune to the racism of its period, which also saw the rise of the Ku Klux Klan. Black women formed their own parallel suffrage movement that was segregated from, and often shunned by, the white movement. White women also exploited racial politics, says Offen, using the black male vote granted in 1865 as an argument for why educated white women should be able to vote as well. In Britain, while the suffragettes may have held racist attitudes, the absence of a large black population made such issues less pronounced. (Nevertheless, the film Suffragette has attracted criticism for failing to call attention to some of nonwhite suffragettes, like Sophia Duleep Singh, who were part of that history.) In Britain, historians say, class played a more pronounced role: the first law enfranchising women passed in 1918, but it only enfranchised women over 30 who owned property.

Universal suffrage for all women didn’t pass in Britain until 1928 — eight years after it was achieved in the U.S — but, for all the ways the movements differed, the work needed to get there crossed boundaries across the world. 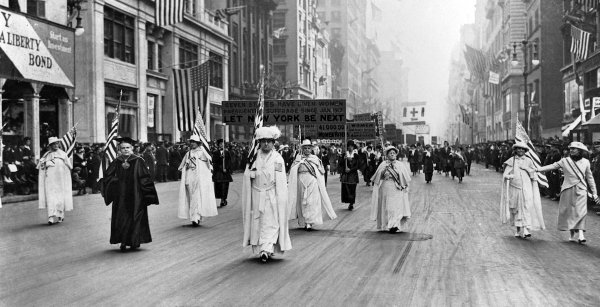 The Real Women's Suffrage Milestone That Just Turned 100
Next Up: Editor's Pick