China's President Xi Jinping and Britain's Prime Minister David Cameron drink a pint of beer during a visit to the the Plough pub on Oct. 22, 2015, in Princes Risborough, England
Kirsty Wigglesworth—WPA Pool/Getty Images
By Joanna Plucinska

Chinese President Xi Jinping and U.K. Prime Minister David Cameron took a break from their state visit negotiations Thursday to enjoy a pint of IPA beer and fish and chips at that most British of places — the neighborhood pub.

After a visit to the Prime Minister’s country estate, Chequers, Cameron took Xi to the Plough at Cadsden, a pub in the English county of Buckinghamshire, to enjoy the traditional British fodder and exchange stories, including one about Cameron accidentally leaving his 8-year-old daughter behind in the pub in 2012, according to Agence France-Presse (AFP).

Xi is currently on a four-day state visit to the U.K., where he has been busy with the evidently thirsty work of signing multibillion-dollar trade deals with Cameron.

The head of the Chinese Communist Party has been entertained in imperial style on his first visit to the U.K — he dined with Queen Elizabeth II and a tiara-clad Princess Kate at a lavish state banquet on Tuesday.

The Plough’s landlord Steve Hollings told AFP that the two leaders chatted for around 45 minutes over traditional English bitters and the deep-fried delicacy. The U.K.’s Foreign Secretary said that Xi enjoyed the meal, if only for one thing — he thought they had scrimped on the salt and vinegar for his fish and chips, according to the Daily Telegraph. 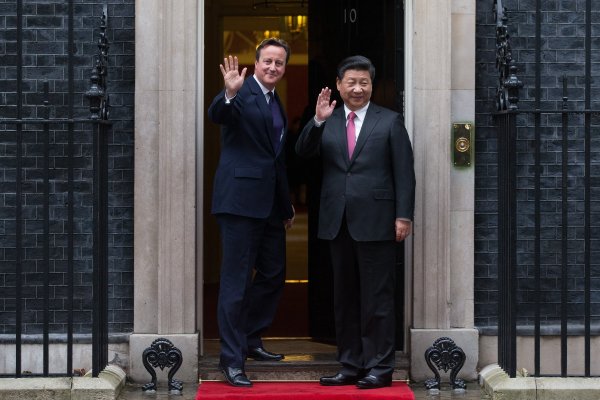