An extinct species of pig-snouted turtle once lived in Utah, according to new research released Wednesday that examines a fossil of the species.

The turtle lived alongside the dinosaurs 76 million years ago, and according to Joshua Lively, who studied the fossil for his master’s thesis at the University of Utah, “Anatomically, it’s one of the most bizarre turtles that ever lived.”

That’s because the snout of the newly discovered turtle has two bony nasal openings, whereas all other known turtles just have one fleshy nasal opening in the skull.

Lively published his findings in the Journal of Vertebrate Paleontology this week, noting the extinct turtle was about 2 feet long, with a streamlined shell for living in a river environment. The climate of southern Utah during the Cretaceous period would have been wet and hot.

The new specimen helps fill gaps in the understanding of turtle evolution. “With only isolated skulls or shells, we are unable to fully understand how different species of fossil turtles are related, and what roles they played in their ecosystems,” said Randall Irmis, curator of paleontology at the museum and associate professor at the University of Utah. 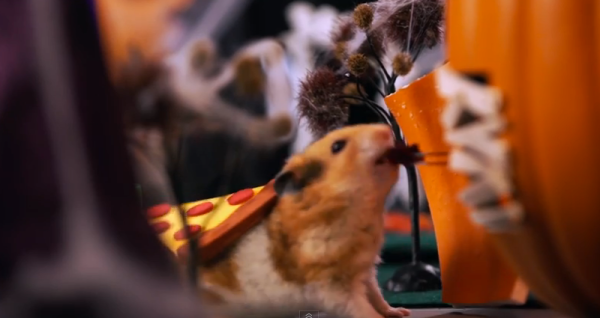 Obviously Pizza Rat Is a Hit at Tiny Hamster Halloween
Next Up: Editor's Pick