House Republicans sought to turn a hearing on Benghazi Thursday into a broader probe of Hillary Clinton’s tenure as Secretary of State.

Over 11 hours of questioning, members of the Select Committee on Benghazi pressed Clinton over the Obama Administration’s approach to security in Libya and the response in the immediate aftermath of the 2012 attack that killed four Americans.

But lawmakers also used their time to ask the Democratic presidential frontrunner whether she was the “chief architect” of the Libyan military intervention, what kind of unofficial advice she received from longtime confidant Sidney Blumenthal and whether she did any planning for a post-Gaddafi government.

For her part, Clinton portrayed herself as a professional who agonized over the death of U.S. Ambassador Chris Stevens, calling him a personal friend.

In a pointed line of questioning before the Select Committee on Benghazi, Clinton was pressed over requests for additional security from Stevens, with Republican lawmakers making a pointed comparison to unofficial advice she received from Blumenthal.

Republican Rep. Lynn Westmoreland noted that Blumenthal, who did not work for the State Department, repeatedly emailed her advice and thoughts on issues of the day, then asked if Stevens had the same access, especially when he felt his life was in danger.

“Congressman, I do not believe that he had my personal email,” Clinton responded. “He had the email and he had the direct line to everybody that he’d worked with for years. He had been posted with officials in the State Department, they had gone through difficult, challenging, dangerous assignments together. He was in constant contact with people.”

One new piece of information that came from the hearing was the fact that Clinton emailed her daughter, Chelsea, on the night of the attacks and referred to them as terrorism, although the Administration had at first suggested the attacks were related to an online video about Islam.

“Two of our officers were killed in Benghazi by an al Queda-like (sic) group. The Ambassador, whom I handpicked and a young communications officer on temporary duty w a wife and two young children,” Clinton wrote on Sept. 11, 2012. “Very hard day and I fear more of the same tomorrow.”

“You tell the American people one thing; you tell your family an entirely different story,” he said.

The line of questioning came as Republican lawmakers sought to emphasize Clinton’s emails in the marathon hearing over the 2012 attacks on a U.S. compound in Libya.

At one point, Republican Rep. Susan Brooks of Indiana pulled out two stacks of printouts of emails to show that she had sent 795 emails about Libya in 2011 but just 67 in 2012, when the attacks occurred.

Clinton responded by arguing that the emails did not tell the full story.

“I did not conduct most of the business that I did on behalf of our country on email,” she said. “I conducted it in meetings. I read massive amounts of memos, a great deal of classified information. I made a lot of secure phone calls. I was in and out of the White House.”

The subtext of the back-and-forth over emails was Clinton’s controversial use of a private server while serving as Secretary of State, which committee chair Trey Gowdy of South Carolina emphasized in his opening remarks.

“This committee is the first committee, the only committee, to uncover the fact that Secretary Clinton exclusively used personal email on her own personal server for official business and kept the public record – including emails about Benghazi and Libya – in her own custody and control for almost two years after she left office,” he said.

Clinton, who was sworn in before the hearing out of the sight of press cameras, was expected to face eight to 10 hours of questioning about the reasons for the attack on a U.S. diplomatic compound, the Obama Administration’s response and its characterization of the attack to the news media in the days following.

In her response to Republicans, Clinton stressed her approach to foreign policy, arguing that the attacks were part of an aggressive and appropriate way of engaging the world.

“Retreat from the world is not an option,” she said. “America cannot shrink from our responsibility to lead.”

In her opening remarks before the Select Committee on Benghazi, Clinton noted that she recommended U.S. Ambassador Chris Stevens for the job in Libya, recalling him as someone with “sand in his shoes” from his work.

“I was the one who asked Chris to go to Libya as our envoy,” she said. “After the attacks, I stood next to President Obama as Marines carried his casket and those of three other Americans off the plane at Andrews Air Force Base. I took responsibility, and as part of that, before I left office I launched reforms to better protect our people in the field and help reduce the chance of another tragedy happening in the future.”

The Republican chair of the committee and its ranking Democrat opened the hearing by sparring over the worth of the investigation.

In his opening remarks, Republican Rep. Trey Gowdy of South Carolina said that the Select Committee on Benghazi intended to write “the final, definitive account” of the 2012 attacks.

The hearing was undercut by remarks from House Majority Leader Kevin McCarthy earlier this month, who said in an interview on Fox News that the committee’s investigation had helped drive down Clinton’s poll numbers.

In his opening remarks, Rep. Elijah Cummings of Maryland, the ranking Democratic member, argued that the select committee was set up with “no rules, no deadlines and an unlimited budget” in order to go after Clinton.

A longtime defender of Clinton on the committee, Cummings noted that the select committee had already spent 17 months and $4.7 million, held four hearings and conducted 54 interviews and depositions, calling it a “taxpayer-funded fishing expedition.”

Eight different congressional committees have investigated the events in Benghazi, holding more than a dozen hearings and 50 briefings and examining 25,000 pages of documents.

Clinton was joined at the hearing by longtime ally and lawyer David Kendall. 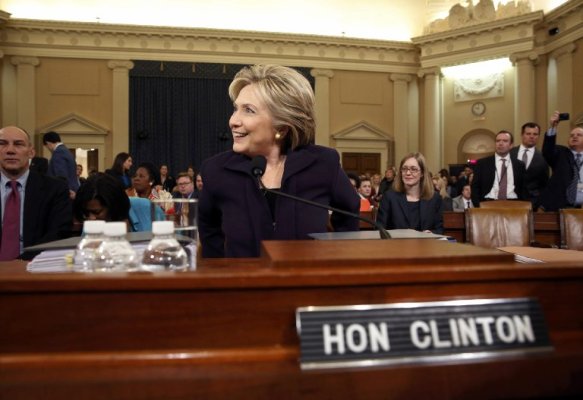