Paul Ryan speaks during a news conference on Capitol Hill in Washington, D.C. on Oct. 20, 2015.
Andrew Harrer—Getty Images
Ideas
By Josh Levs
Josh Levs is the author of All in: How Our Work-First Culture Fails Dads, Families, and Businesses–And How We Can Fix It Together.

Kudos to Representative Paul Ryan on making an important statement about dads and families. Now he should stop and consider why many people are accusing him of hypocrisy.

By stating that if he becomes U.S. House Speaker, he “cannot and will not give up” family time, he’s added his voice to the growing numbers of guys ready to state publicly that kids need their fathers, too. This is crucial. Sadly, many people in the halls of power—in both government and corporations—maintain views of men and women straight out of the Mad Men era.

These views are holding all of us back. They’re the reason the U.S. is the only developed nation with no guaranteed paid maternity leave. They’re also why only 14% of companies have any paternity leave, and the amount offered has gone down in recent years, according to the Families and Work Institute.

The net result is that we, as a nation, do nothing to ensure that newborn children can have a parent at home and food on the table for at least a block of weeks. It’s heartbreaking and shameful.

Here’s the good news: Three U.S. states have taken on this problem by creating paid family leave. Businesses are not required to pay salaries during leave; instead, a fund is created through a small payroll deduction. Businesses and workers alike have high praise for the programs. They’re a win-win, across the board.

The FAMILY Act would create this on a national scale. It calls for small contributions from both employers and employees—just 20 cents for every $100 in wages, with a maximum of just $237 per year.

A large majority of Republicans, as well as Democrats and Independents, support a paid family leave insurance program. Even the U.S. Chamber of Commerce, which once said it would launch a “war” against such policies, has gone silent now that the facts are in.

This brings us to Ryan’s record. He voted against paid family leave for federal employees. And the Family Medical and Insurance Leave act was referred to his committee, where it has stalled.

The Working Families Flexibility Act, which he co-sponsors, would not create a paid family leave system. Instead, it banks on people working overtime in order to receive time off. His own legislation begins with a demand that workers give up family time in order to earn any.

It’s wonderful that Ryan is making it clear that he prioritizes family time over the high-profile role of U.S. House Speaker. But he has the luxury of making that statement. Tens of millions of hardworking Americans don’t. When they have newborn children, elderly parents or sick spouses to care for, they can’t afford to take “family time.”

Still, Ryan’s remarks matter a great deal. Joan Williams, founding director of the Center for WorkLife Law, and I discussed them in San Francisco on the eve of a conference about gender equality in business. She agreed that by making this statement, he helped change “the default assumptions” people have. He helped show that a man can be “extremely ambitious” and still say, “my family time is not negotiable.” That, she said, is “a revolution.”

Welcome to the revolution, Representative Ryan. Now please help make it possible for millions of others to join in. 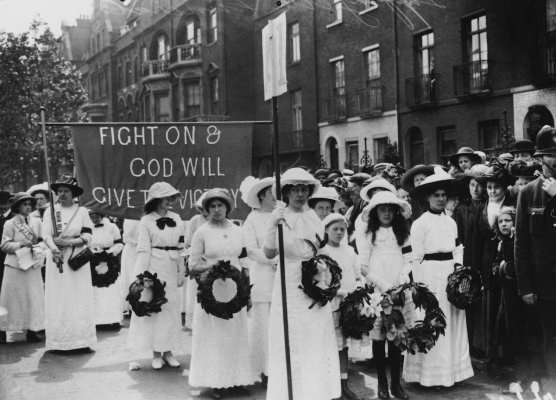 How British Suffragettes Radicalized American Women
Next Up: Editor's Pick