The Rise of Islamist Terror in Bangladesh

Niladry Chattopadhya was in his apartment in the Bangladeshi capital of Dhaka, around noon on Aug. 7, when there was a knock on his door. “Without opening the door, I asked, ‘Who is it?'” remembers his wife, Asha Moni. It was a young man who said their landlord had sent him to view their apartment, as he was thinking of renting a similar unit that was locked. Moni let him in. Minutes later, three men barged through and brutally hacked Chattopadhya to death with a machete.

Born a decade and a half after Bangladesh won its independence from Pakistan in 1971, Chattopadhya believed in the founding ideals of his country: Muslim but secular, united by the Bengali language and its tolerant culture. In 2013, the 27-year-old blogger joined street protests known as the Shahbag movement that demanded capital sentences for pro-Pakistan Islamist leaders found guilty of war crimes during the independence fight. (Two have been executed since 2013.) Backing them today were radicals bent on turning Bangladesh into a hard-line religious state–the same radicals who eventually murdered Chattopadhya.

Chattopadhya’s was the fifth such killing since the 2013 protests, making him the latest victim of a violent clash between radicals and Bangladesh’s embattled liberals. “In a sense, we won independence in 1971, but we are still fighting the long war for Bangladesh,” says K. Anis Ahmed, publisher of the Dhaka Tribune newspaper.

The first killing, of the blogger Ahmed Rajib Haider, occurred in February 2013. Like Chattopadhya, Haider had written against religious fundamentalism. Then, in February this year, machete-wielding assailants murdered Avijit Roy, a Bangladeshi-American writer and blogger critical of religion. In March came the killing of Washiqur Rahman, followed by the murder of Ananta Bijoy Das in May.

All five were targeted in an Islamist campaign to paint those involved in the Shahbag protests as atheist and anti-Islamic–charges guaranteed to anger ordinary Bangladeshis. But while Roy, Chattopadhya and others were atheists, “in the Shahbag [movement], we never asked anyone’s religion,” says Arif Jebtik. Jebtik is a practicing Muslim, yet his name has appeared on blogger hit lists circulated by Islamist radicals–lists that have also featured Roy, Chattopadhya, Rahman and Das.

The response of Prime Minister Sheikh Hasina has done little to cool the climate of fear. Authorities have rounded up 20 suspects in the killings this year and Bangladesh has banned Ansarullah Bangla Team, the local radical group blamed for the murders. But Hasina, while stressing her commitment to secularism, has little sympathy for those who identify with no religion. “If anybody thinks they have no religion, O.K., it’s their personal view … But they have no right to write or speak against any religion,” she tells TIME.

The stakes could not be higher. As ISIS grows beyond the Middle East and al-Qaeda seeks to regroup in South Asia, Bangladesh–a country of 160 million that is over 90% Muslim–could be fertile ground for the growth of fundamentalism. Hours after Chattopadhya’s death, a group called Ansar al-Islam that identified itself as a branch of al-Qaeda took credit for the attack. More recently, social-media accounts with suspected ties to ISIS took credit for the murder of two foreigners in Bangladesh in September and October. The government disputes the claims, and analysts are skeptical of organizational links between local and international groups. “But that does not mean local militants won’t seize the opportunity if it appears,” says Ali Riaz, a Bangladeshi-American political scientist at Illinois State University.

It is a fear that is keenly felt by the bloggers. As Jebtik, the Shahbag blogger who counted Chattopadhya among his friends, puts it: “We are the last defense line between the progressive Bangladesh and the Islamist, terrorist Bangladesh.” 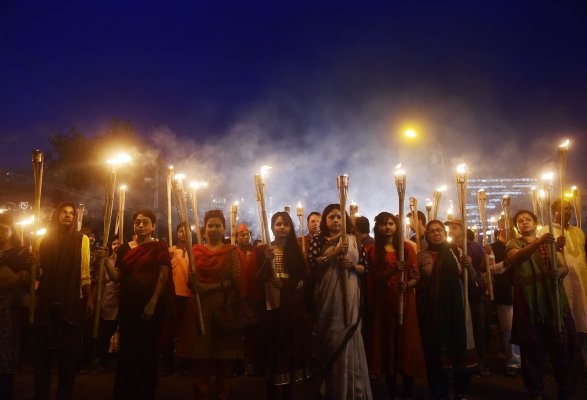 Fatal Speech
Next Up: Editor's Pick