Fiorina had no interest in debating this man, and a supporter told him to move along. Fiorina’s confronter shuffled away toward the real reason he was at the high school this Friday evening: the Grinnell Tigers’ football game. The marching band was warming up, and the percussion section filled the hallway with its roar. “I’m loving this band,” Fiorina said to no one in particular. “Listen to these drums.”

The former CEO of Hewlett-Packard, the lone woman in the Republican field, seemed unfazed by the confrontation. After all, Fiorina is accustomed to being called a fabulist–and worse–in this race and well before. During her time in Silicon Valley, she often drew criticism for leaving shareholders feeling shortchanged. Now that she’s a candidate for President, her performances in two televised debates so far have been field days for fact checkers. Her statements about Planned Parenthood have drawn widespread criticism for being inaccurate.

Fiorina doesn’t much care. Neither, it seems, do the voters. They want a fighter, not an expert witness. Which helps explain why Fiorina has risen from also-ran to credible contender. Her political statements reinforce beliefs her audiences already hold. Among her most ardent supporters, what matters most is her ability to make the case for the GOP and for herself. And when she’s confronted with the contrary, she just heads to her next stop. She does not have time to litigate the details.

Even by the unusual standards of the 2016 GOP primary, the Fiorina campaign is in a league of its own. No lofty policy speeches or television ads are planned through the campaign. She’s betting instead that she can win this through personality. Judging from three days TIME spent with Fiorina in October, she faces better odds than most. The 61-year-old Fiorina is a masterly saleswoman and a barometer of her audiences’ moods. “Iowans don’t worry a lot about the pundits or the polls or the money,” she says, pointedly downplaying her critics and shortcomings. “What they worry about is if you show up in their living rooms, at their chili cook-offs, at their football games.”

Carly Fiorina has always been good at working the refs and ignoring bad calls. When she missed the deadline to apply for business school, she refused to take no for an answer and insisted she be allowed to speak to the dean. She talked her way in. She moved her way up through the ranks of AT&T before decamping to Lucent, an AT&T spin-off. There, she was such a star that Hewlett-Packard made a play for her, elevating Fiorina to the rarefied stratosphere of female CEOs. (Even today, women at that rank are hard to find: just 23 Fortune 500 CEOs are female.)

Fiorina shares this version of Carly-ology with voters, and she’s a talented bard. In her telling, she started as a secretary in a nine-person real estate office and peaked as CEO. But like so much that is part of Fiorina’s bid, her only-in-America story has earned a second look. It turns out that she actually took a break from her secretarial work to earn the first of her two graduate degrees in business. It’s a genuine up-by-the-bootstraps story, only with footnotes missing. Fiorina shares only what she thinks will help her cause.

She seldom brings up that she was fired from the Hewlett-Packard C-suite in a spectacular clash with the storied firm’s board of directors. Members of the Hewlett and Packard families objected to a Fiorina-led $25 billion merger in 2001 with Compaq, then a leading maker of personal computers. She narrowly pushed through the merger, although detractors said she promised more than she delivered. She counters that she steered HP through an early tech crunch that killed peer companies like Gateway.

Debates over her stewardship now color much of her campaign. Yale School of Management’s Jeffrey Sonnenfeld has called her time as CEO a disaster: HP lost half of its value while the S&P index dropped just 7%. Even as rivals Apple and Dell rose and Facebook started on Harvard’s campus, HP went nowhere.

Fiorina brushes off the criticism. She’s running as a leader, not a CEO. Voters are looking for a candidate who promises them help. “For someone who is coming at this as the least-known candidate in the field, still, I appreciate the fact that I have an opportunity to meet people face-to-face and they get to know me,” she says.

But dodgy claims are becoming a Fiorina hallmark. She says 1,700 banks were put out of business by a bill that passed in the aftermath of the Wall Street meltdown of 2008. Federal Deposit Insurance Corporation data shows community banks were suffering long before Dodd-Frank went into effect in 2010; one-office banks have seen their numbers fall 84% in the past 30 years. And she likes to tell audiences that 307,000 veterans have died awaiting care through the Department of Veterans Affairs. That figure is based on a VA internal watchdog report, but its authors also caution that the data is murky at best, and at least 258,367 of the deaths happened at least four years ago–well before the current scandal became public. She suggests that Common Core education standards are a product of the Department of Education and that the next President can undo the current deal with Iran over its nuclear program; neither is true.

Again, her out-of-context claims or incomplete information might not matter. Certainly, Fiorina seldom suffers from self-doubt. She has used her gender shrewdly, dismissing it as a rationale for Hillary Clinton’s campaign while making clear it is a vital strength of her own. “Hillary Clinton is going to be the Democrat Party’s nominee,” she often says. “I cannot wait to debate her.” First, though, she has to navigate the GOP primary campaign, which is shaping up to be much longer and more complicated than any in memory.

Fiorina’s biggest deficit in terms of credibility might be her attacks on Planned Parenthood. In the face of overwhelming evidence that her public statements are not accurate, she refuses to give an inch. It’s why Planned Parenthood backers are regulars at her events, often carrying a banner calling her Carlie Fiborina.

“Carly Fiorina continues to double down on her lies about Planned Parenthood,” Planned Parenthood organizer Kate Kight says after a Fiorina town hall in Waterloo. “She’s not running on the truth.” Kight and her friends in pink women are watching T-shirts are familiar guests at Fiorina events, where they try to elicit an acknowledgment that Fiorina’s description of Planned Parenthood’s handling of fetal tissue is not correct.

It’s an uphill battle. Fiorina’s criticism of Planned Parenthood is standard fare in her speeches. She calls it a political slush fund for proabortion Democrats, a harvester of fetal tissue for profit. She says its leaders have not denied it, so that’s a tacit admission. (In fact, Planned Parenthood president Cecile Richards testified to the opposite when she appeared before Congress. And Fox News Sunday host Chris Wallace challenged Fiorina on this: “There is no actual footage of the incident that you just mentioned.” Fiorina gives no ground: “I’ve seen the footage.”)

It might not matter. The Republicans who will pick their party’s nominee are not, at the moment, rewarding nuance or attention to detail. Wonky former Florida Governor Jeb Bush, who prides himself on substance and has put out a thoughtful tax plan, is struggling to keep his campaign afloat while cutting aides’ pay.

Meanwhile, businessman Donald Trump is enjoying success based on his celebrity and willingness to say almost anything to win another round of headlines. Close behind, retired neurosurgeon Ben Carson continues to capture the GOP’s imagination with worries about Muslims and government growth. Neither Trump nor Carson has previously sought elected office as a Republican, and both men appeal to voters’ desire for someone who promises to upend Washington.

Still, Establishment-minded Republicans note that Trump spends more time sending provocative tweets and calling cable-news and talk-radio hosts than mounting a traditional campaign in Iowa and New Hampshire. Carson, meanwhile, is on a two-week break from the campaign. Instead of meeting with voters, he is selling his books. It hasn’t seemed to hurt him in the polls much.

Then there is Fiorina, who perhaps is best built of the three for the long haul. She remains in the hunt in the early-nominating states, even though her national poll numbers have dipped. After her second debate, she rose to 15% support, according to a CNN/ORC national poll. The same poll saw her slump back to 4% in results released Oct. 19. Of the self-declared outsiders, she’s the one who is trying to run a campaign along traditional lines with frequent stops in Iowa, where she has participated in more than 70 political events. A skilled spokeswoman, Fiorina decries Washington as a rigged town and politics as a stacked-against-you system that rewards insiders and the powerful. (She largely ignores that she is a former powerful CEO who has advised Secretaries of Defense, State and Homeland Security, offered counsel to a CIA director and worked as a senior adviser and spokeswoman for John McCain’s White House bid. She even tried to make it to Washington before, running in 2010 for the Senate.)

But now here she is, climbing the high school bleachers to watch the pregame show and taking selfies with the cheerleaders. A day earlier, she stopped by a different school so its journalism class could interview her–and then joined their on-camera dance party. She is grabbing soup at Panera, snacking on grapes between events and joking about cold pizza with AM radio hosts.

She tells voters that she has held the top security clearance available as an adviser to warriors, diplomats and spies. But two minutes later she’s talking about how untrustworthy government has become and how voters need to help her oust the lot of them. That’s a message others are carrying, but one that sounds, well, less angry and more reasonable when Fiorina says it.

At a Pleasant Hill home, a gay-rights activist pressed her on whether LGBT workers deserved protections. “As a CEO, we provided benefits to all same-sex couples,” Fiorina said. She then said government should step in–to protect businesses that want to discriminate based on their faiths. When confronted about climate change, she said the bigger threat was coming from Islamic State militants. “Don’t roll your eyes, young lady,” Fiorina said curtly. “That is a fact.” 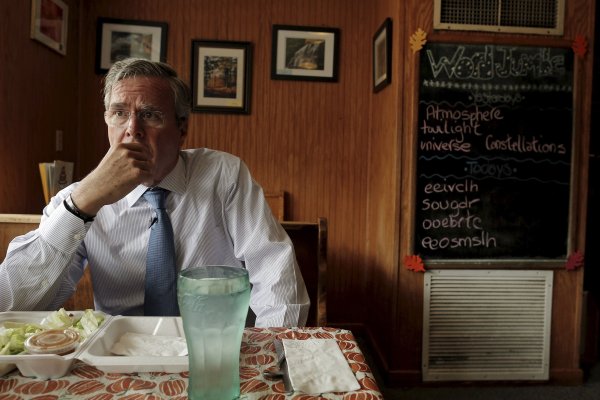