A 5-year-old Missouri girl with a rare form of kidney cancer was treated to a very special day, serving as St. Charles County’s first-ever police chief for the day before beginning four months of hospitalization.

On Friday, Sydney Coari was honored in a special induction ceremony, spent time with Cinderella, toured the police station and even solved a crime at a local McDonald’s.

“This day, according to Sydney, was ‘the very best day of her life!’ ” Sydney’s great aunt, Dana Christian Manley, tells PEOPLE in an email. “To her, it showed that people she don’t even know are rooting for her to get well and care about her!”

In February, doctors discovered a large malignant tumor on Sydney’s kidney, according to her GiveForward page.

“She had her right kidney and adrenal glands and lymph nodes removed,” Christian Manley explained to KDSK.

Despite aggressive chemotherapy and radiation, Sydney’s cancer relapsed in June. After 17 rounds of chemotherapy, she will soon be admitted for four months of isolation prior to surgery.

The St. Charles County Police Department first took note of Sydney’s case when Officer Shawn Birdsong pulled over a car she was riding in for a minor traffic violation, KDSK reports. After learning about the young girl’s condition, Birdsong handed her a note saying he hoped she would felt better soon.

“During the initial traffic stop, Officer Shawn Birdsong was doing his job, which he should have done, but he went above and beyond to just try to make Sydney feel better once he saw her and saw that she wasn’t feeling very good,” Christian Manley says.

Birdsong was so moved by meeting Sydney that he made arrangements to have her named St. Charles County’s first-ever Chief for the Day and organized a day full of surprises – including the chance to stop the Hamburglar at a Cave Springs McDonald’s.

“This meant the world to us, because Sydney hasn’t had that a lot in her life, and it showed her that the world does have some pretty awesome people in it,” Christian Manley adds.

After her special day, Officer Birdsong has continued to check on Sydney daily and visited her in the hospital on Tuesday. On October 28, the young girl will undergo a stem cell transplant and will then spend up to four months in the hospital recovering.

“He texts or calls in the mornings and evenings just to make sure she’s doing okay. I believe they have become lifelong friends,” Christian Manley says. 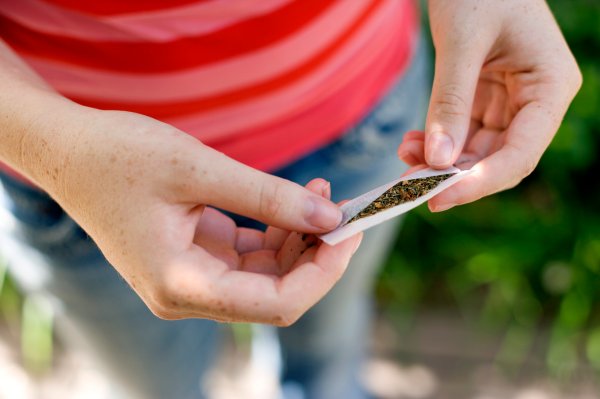 1 in 10 Americans Now Smoke Pot
Next Up: Editor's Pick