Here's Where Biden Would Have Broken With Clinton

When he announced he would not run for the Democratic presidential nomination Wednesday, Vice President Joe Biden outlined a hypothetical campaign platform that would have fallen to the left of frontrunner Hillary Clinton on three key issues.

In brief remarks from the Rose Garden, he outlined proposals to raise taxes on the wealthy, increase the child-care tax credit and make college free.

“While I will not be a candidate, I will not be silent,” Biden said. “I intend to speak out clearly and forcefully, to influence as much as I can where we stand as a party and where we need to go as a nation.”

Biden’s words were forceful, if not entirely clear, and show how he might have peeled votes away from Clinton if he had run.

Like the former Secretary of State, Biden argued that the middle class is being squeezed by rising inequality, calling for the wealthy to pay more in taxes to help pay for government programs that would address the problem.

“Wealthy folks will end up paying a little bit more, but it’s my guess, and I mean this sincerely, it’s my guess they’ll be happy to build a stronger economy and a better-educated America,” he said.

Biden’s proposal: Limit deductions on federal income tax to 28 percent of income. Although he did not elaborate on the pitch, it sounds similar to one included in President Obama’s proposed budget for the 2013 fiscal year, which was not adopted by Congress. The Administration estimated that the proposal, which would affect married couples with a joint income of more than $250,000, would raise more than $584 billion over a decade.

By contrast, Clinton has said she would raise short-term capital gains tax rates and spoken vaguely about the wealthy paying their fair share. Biden’s proposal is more specific than what Clinton has proposed and would have set a progressive benchmark for her campaign.

In his remarks, Biden proposed using the money that would raise to pay for tripling the child-care tax credit, an idea put forward by President Obama earlier this year. Under that proposal, families could get a tax credit of up to $3,000 for each child under the age of 5.

“Child care is the one biggest barrier for working families,” Biden said. “We need, as the president proposed, to triple the child-care tax credit. That alone will lead to a dramatic increase in the number of women able to be in the workforce. And will raise our economic standards.”

Finally, Biden called for making college free, although he did not explain exactly what he meant by that.

“We need to commit to 16 years of free public education for all our children,” he said. “We all know that 12 years of public education is not enough. As a nation, let’s make the same commitment to a college education today that we made to a high school education a hundred years ago.”

By comparison, Clinton has called for debt-free college at public universities, but not tuition-free college, as Vermont Sen. Bernie Sanders has proposed. Clinton’s plan would involve grants to states to slow the growth of tuition and allow students to refinance their loans.

Those were not the only issues Biden raised, but they were the most specific proposals he put forward. He also called in general terms for protecting LGBT rights, avoiding large-scale military operations, passing immigration reform and guaranteeing equal pay for women—all issues on which there is little disagreement among the Democratic field.

His only other specific proposal was to spend more money on health research to end cancer. Although neither Clinton or Sanders has spoken on the topic, it’s unlikely that they would have drawn a distinction with Biden on it if he had run.

Read Next: Joe Biden Says He Won’t Run for President in 2016 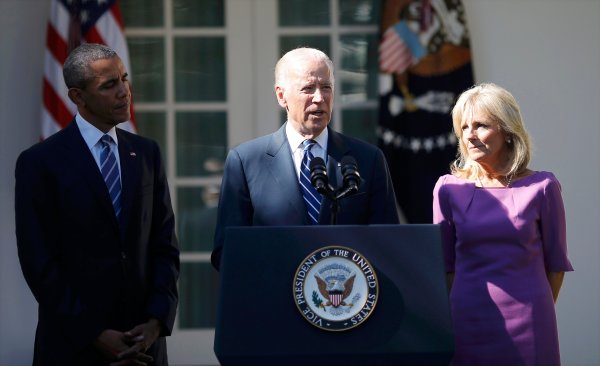 Clinton and Sanders Shower Praise on Biden as He Exits 2016 Stage
Next Up: Editor's Pick