A hundred years ago, the word “hello” spoken in Arlington, VA was heard in Paris. The word originated from the vibrations in the vocal chords of Mr. B. B. Webb, an engineer at the Arlington radio station. That sound passed through Webb’s lips, crossed Virginia airspace, entered a radio mouthpiece. There it was converted into electromagnetic waves, and in that moment on Oct. 21, 1915, human speech did something it had never done before: crossed the Atlantic.

On the European end, an antenna atop the Eiffel Tower picked up the radio waves. Two engineers with the American Telephone and Telegraph Company (now AT&T) stationed at the receiver, which demodulated information from the signals into audio, heard Webb’s voice on the Paris side.

The two engineers were H.E. Shreeve and A.M. Curtis, who reported that they could also hear other phrases from Webb, concluding with “Goodbye, Shreeve.”

That night, the American Telephone and Telegraph Company president Theo Vail sent a dispatch that said:

The speech transmission to Paris was possible because engineer and tower designer Alexandre-Gustave Eiffel wanted to keep the tower that bore his name useful. So, he affixed an antenna to the top in 1898, so that people could conduct experiments in wireless telegraphy. The city subsequently re-funded the tower rather than disassembling it for scrap metal.

Paris and Arlington had exchanged wireless signals for the first time two years earlier, in 1913, to measure the difference in longitude between the two cities. After the speech transmission in 1915, it would then take more than 11 more years for the first two-way transatlantic call to take place, between New York and London (and in the meantime, TIME was founded; read the magazine item about the call here). 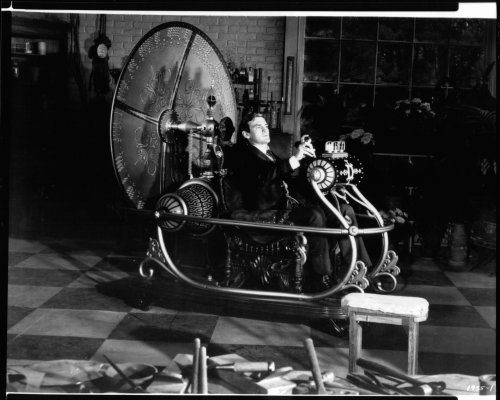 Here's How People in the Past Imagined the Future
Next Up: Editor's Pick