How Sunscreen May Be Destroying Coral Reefs

Corals are bleached on a seabed near Okinawa island on Aug. 26, 2013.
The Yomiuri Shimbun—AP
By Justin Worland

A chemical in sunscreen may be contributing to the destruction of the coral reefs as swimmers trying to protect their skin venture near reefs, according to new research.

Researchers behind the study, published in the journal Archives of Environmental Contamination and Toxicology, found that the chemical oxybenzone has toxic effects on young coral that causes endocrine disruption, DNA damage and death of coral, among other the problems. Oxybenzone also exacerbates coral bleaching, a process by which coral reject symbiotic organisms and lose their color. Bleaching has been particularly prevalent in recent years due to rising sea temperatures.

Currently, somewhere between 4,000 and 6,000 tons of sunscreen enters coral reef areas around the world each year, according to the U.S. National Park Service. That’s a lot of sunscreen considering how little it takes to cause toxic effects. According to the new research, toxicity occurs at a concentration of 62 parts per trillion. That’s the equivalent of a drop of water in an Olympic swimming pool, according to study author Omri Bronstein, a researcher at Tel Aviv University.

“Current concentrations of oxybenzone in these coral reef areas pose a significant ecological threat,” Bronstein said in a press release.

Read More: Here’s Why You May Soon Be Using Sunscreen in the Dark

Researchers were careful to note that they are not advocating the swimmers stop wearing sunscreen, which protects against skin cancer. Instead, they urged consumers to consider carefully what sunscreen they buy before swimming in the ocean. Sunscreens with titanium oxide or zinc oxide have not been found to harm reefs, according to the National Park Service. Additionally, swimmers can cover their upper body with long sleeve shirts or other apparel to reduce sunscreen use.

Sunscreen is part of a long list of threats to coral reefs that includes pollution, overfishing and climate change. Beyond their impressive appearance, coral reefs play an important role for local communities and the world at large. For one, they contribute to local economies through tourism and sustain ecosystems where people can fish. One estimate from the National Oceanic and Atmospheric Administration put the economic contribution of coral reefs around the world at $30 billion each year. Reefs also protect the global environment by serving as carbon sinks, absorbing carbon dioxide that would otherwise contribute to global warming. 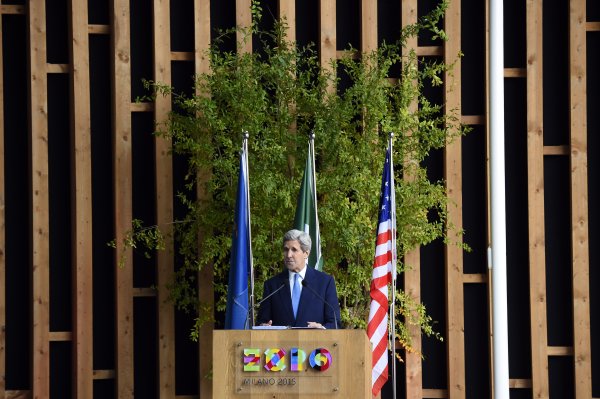 Kerry Urges Climate Agreement Ahead of Paris Conference
Next Up: Editor's Pick