Ahmed Mohamed, the 14-year-old who was arrested at MacArthur High School in Irving, Texas for allegedly bringing a hoax bomb to school, speaks during an interview with the Associated Press, in Washington, Oct. 19, 2015.
Andrew Harnik—AP
By Tanya Basu

Ahmed Mohamed, the 14-year-old whose homemade clock was mistaken for a bomb and incited a national discussion on STEM education and how Muslims are perceived, met President Obama on Tuesday, just over one month after the student’s arrest in September.

“SO HAPPY, I CANT BELIEVE THAT I MET THE #president of THE #UNITEDSTATES!!!” wrote Mohamed on Instagram, captioning a photo of Obama embracing the young man.

Ahmed, whose Instagram moniker reflects the #IStandWithAhmed hashtag that went viral soon after his arrest, was visiting the White House for Astronomy Night, which the administration billed as an opportunity for the President to encourage students to pursue STEM (science, technology, engineering, and mathematics) subjects.

Obama extended the invitation himself via Twitter soon after Mohamed’s arrest.

Obama is only the latest powerful figure the teen has spoken with over the past few weeks. Mohamed has also met with Queen Rania of Jordan, Google co-founder Sergey Brin, and even the controversial President of Sudan, Omar al-Bashir. Ahmed will visit with Rep. Mike Honda, who represents Silicon Valley, on Tuesday. Honda has sent Attorney General Loretta Lynch a letter asking the Department of Justice to investigate Mohamed’s arrest.

Watch footage of Mohamed’s visit to the White House below. 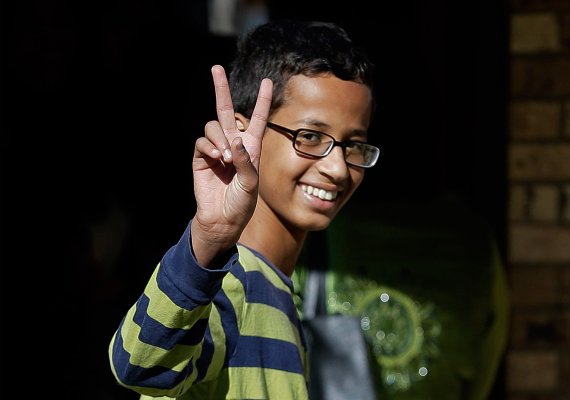 Ahmed the Clock-Maker Heads to the White House
Next Up: Editor's Pick