What a Justin Trudeau Win Means for Canada

Canada’s general elections have concluded with a landslide win for the Liberal Party and their leader, Justin Trudeau, ending the almost 10-year-rule of the Conservative Party of Canada (CPC) and Prime Minister Stephen Harper. A win was never a sure thing for the party, which oscillated between third, second and first place throughout the campaign. On the day itself, many voters complained about issues at polling booths, saying that some of the elections staff didn’t show up on time, or had scrupulous and difficult demands for voter identification. Others claimed to have received premarked or spoiled ballots. Despite all of that, the Liberal Party has usurped the Conservative majority, with Harper stepping down as the leader of the CPC and conceding defeat. Trudeau and his party will now begin the long process of making their mark on the Canadian political landscape and proving to voters that they made the right call.

Who Is Trudeau?
The Liberal Party came out of the 2011 election in third place, winning only a 10th of the seats in Parliament — a historic loss for a party that has produced many noted Canadian Prime Ministers and was viewed as the main rival to the Conservatives. A party leadership race ended in the young, shaggy-haired Justin Trudeau coming forward as the new leader to replace staunch academic Michael Ignatieff, and his interim replacement, Bob Rae. But many doubted that Trudeau had the wisdom — he’s only 43 — or the experience to take the reins of the Liberal Party, let alone run the country as its Prime Minister. He’d only entered politics in 2008 as the member of Parliament for the Montreal riding, or electoral district, of Papineau. He had also previously been a teacher and activist, not a lawyer or a business leader like some of his political peers.

He also has a historic legacy to live up to — his father was Prime Minister Pierre Elliott Trudeau, a Canadian leader of legendary proportions who helped usher in the Canadian Charter of Rights and Freedoms and official bilingualism throughout the country. While in some ways, this legacy has given the younger Trudeau a boost — growing up famous has made him very comfortable and recognizable in the public eye — it’s also caused inevitable comparisons and criticisms. During the election campaign, some speculated that Trudeau simply didn’t have the intellectual capacity of his father — a lawyer and professor — and wouldn’t be able to lead the nation with the same vision and decisiveness.

Evidently, these qualms were not enough to stop Canadians electing Trudeau as the country’s new Prime Minister. Now, Trudeau has some big promises to fulfill to prove that his leadership qualities have more to do with his brains than his good hair and charm as he plots out his first moves as the country’s leader.

Here’s what the Liberals have pledged to do in office:

1. Boost Spending
The Liberals have said that they would accept a series of budget deficits to fund major infrastructure spending that would in turn boost the economy. This differs greatly from the Conservative and NDP platforms, both of which promised balanced budgets. Trudeau justifies this policy by arguing that the weakened Canadian economy, currently in a recession, needs stimulus now and that additional deficits, estimated at $10 billion annually, would have a marginal impact as economic outlooks improve. He promised to balance the budget by the 2019–20 cycle. He also said that this spending would contribute to greener infrastructure to help Canada become more environmentally friendly, especially after Harper’s extensive cuts to environmental programs and investments in oil sands.

The tax hike on the rich stems partially from Trudeau’s criticism of the Conservatives’ taxation policy. Over the course of the elections, he frequently accused Harper’s government of favoring tax cuts for the rich and big corporations over regular Canadians. The Conservatives had promised a series of tax breaks and relatively mild spending in their fiscal platform in these elections, making their careful stewardship of the economy their primary promise. Critics say that the Liberals’ taxation and spending policies are foolish and will only hurt the economy.

3. Legalize Marijuana
Trudeau has vowed to legalize marijuana — a drug that he says has needlessly left many Canadians with criminal records and cost the government too much in law enforcement. The policy itself hasn’t been that controversial, but Trudeau has been targeted for his support of marijuana by his political opponents for years. During the campaign, both Harper and NDP leader Thomas Mulcair threw jabs at him for his stance and history with the drug. The Conservatives also attacked him for having once admitted to consuming weed a handful of times over the course of his life, including as a legislator. The criticism is no surprise — after all, Harper has been extremely critical of marijuana during his time in office, saying the drug was just as harmful as tobacco. It’s also unclear how quickly Trudeau would roll out this policy: he has admitted that he hasn’t sorted out the details, like how cannabis would be taxed and how those revenues would be distributed.

4. Take In More Refugees
Trudeau’s campaign rhetoric has emphasized his pluralistic, multicultural view of Canada and his deep desire to continue supporting immigrants and Canadians of all cultures. He called on Harper’s government to be more generous in the face of the migrant crisis throughout the campaign, saying that the Liberals would support the immediate processing of 25,000 Syrian refugees and a $100 million investment into helping Canada resettle and process refugees more quickly. In contrast, Harper only agreed to process 10,000 additional refugees over the course of four years. “We need to provide the support we can, and we need to be making this situation better in various ways that, quite frankly, we’re not doing at this time,” Trudeau said at one of his many campaign stops in September.

As a part of his bid to make Canada more culturally accepting, Trudeau also vowed to put an end to the Conservatives’ push for banning the niqab — a veil that partially covers the face worn by some Muslim women — at citizenship ceremonies, despite the fact that many Canadians were actually on board with the ban.

5. Reform the Voting System
Finally, Trudeau has vowed to reform the country’s current first-past-the-post voting system, which has been unpopular with liberal Canadians, whose votes are split between three main progressive parties, but a favorite of conservatives, who tend to vote in a bloc for the CPC. Back in June, Trudeau vowed that, if elected, he would create an all-party committee to pick a more effective national electoral system for the next elections, looking at options including ranked ballots and online voting.

Proportional representation seems to be one of the strongest options to date. It would give small parties that receive a percentage of the popular vote, but fail to garner wins in ridings, more equal representation in Canada’s Parliament. But, it would also make majorities, like the one the Liberals just won, significantly more difficult to achieve. Canada would probably see more coalition and minority governments, which are generally slower and less efficient at processing new policies.

The Liberals will have a relatively easy time passing legislation through Parliament now thanks to their majority, but it might take a while to reverse almost 10 years of change brought in by the Conservatives. Trudeau will be under a harsh spotlight as politicians and voters alike see if their gamble on a young, inexperienced media darling will play out in the policy arena. 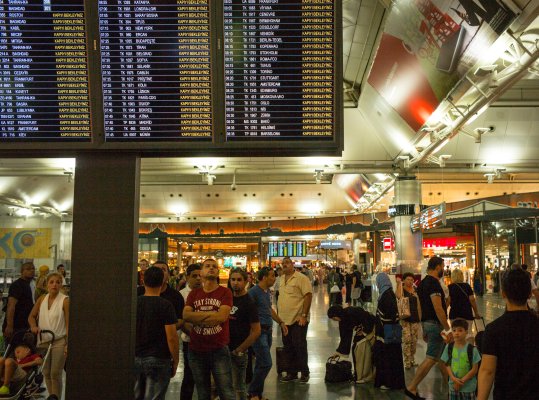 Suspicion Over Death of U.K. Journalist
Next Up: Editor's Pick