Sri Lanka appealed to China this week to partially relax the immense foreign debt owed by the South Asian island nation that has contributed to one of its worst-ever financial crises.

“I urge China to put the acrimony of the past behind us and come and help us by adjusting the terms of the loans to make them more viable,” Sri Lankan Finance Minister Ravi Karunanayake said in an exclusive interview with the South China Morning Post on Sunday.

Sri Lanka is chock-full of Chinese investment, with nearly 70% of the country’s infrastructure projects funded and built by China — thereby leading to a near tripling of its foreign debt over the past five years. However, many of those projects, initiated under Sri Lanka’s former strongman President Mahinda Rajapaksa, have been halted — much to China’s displeasure — by the government of his successor Maithripala Sirisena over allegations of widespread corruption.

Even as it dispatched a special envoy to liaise with Sirisena’s government earlier this month, Beijing remains firm that none of the much-needed foreign direct investment (FDI) to salvage Sri Lanka’s economy will be forthcoming until the impasse over ongoing projects — worth billions of dollars — is resolved.

“We did not create the problem, we inherited it,” Karunanayake said about the Chinese projects. “But it has to be fixed all the same.”

Whether they created the problem or not, Sirisena’s election earlier this year marked a monumental shift in his country’s rapidly progressing alliance with China under Rajapaksa, which was being watched with some consternation by Sri Lanka’s northern neighbor and South Asian power India.

Sirisena and his new Prime Minister Ranil Wickremesinghe insisted in a previous interview with TIME that their pledge to enhance cooperation with India and Western powers didn’t necessarily represent a shift away from China but a more general nonaligned foreign policy.

However, the stark picture painted by its rapidly escalating foreign debt has thrust the Sri Lanka–China relationship back into the spotlight and made its mending a priority.

“Chinese loans are a big part of our problem,” said Karunanayake. “A bulk of the government expenditure goes into servicing them.”

His words are thrown into sharp relief through figures cited by Palitha Ekanayake, a former director general of the country’s Ministry of Rural Economy.

Karunanayake has even gone to the extent of promising “no questions asked” while calling for his compatriots with Swiss bank accounts to move their money back into the country, as he tries to shore up foreign reserves before presenting a crucial budget.

Sri Lanka’s eagerness to re-engage with China is also illustrated by the fact that Karunanayake’s comments coincided with a statement by one of its top defense officials, saying an unofficial suspension of Chinese naval ships docking on Sri Lankan shores — another reported allowance by the previous government that caused India greater alarm than any economic activity — could potentially be reconsidered.

The country’s recently appointed Defense Secretary, Karunasena Hettiarachchi, told Reuters on a visit to the Chinese capital that he would give “due consideration” to requests for Chinese ships to stop over.

“We are serious about putting our relationship [with China] on the right path and mending the pathetic finances we have inherited from a corrupt regime,” he said. 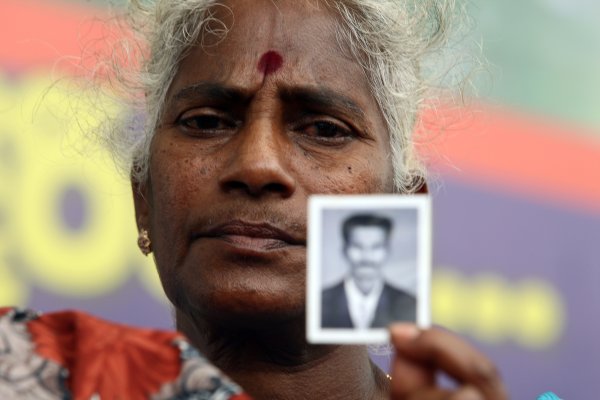 Tamil Prisoners on Hunger Strike in Sri Lanka
Next Up: Editor's Pick