John Oliver thinks so little about Canada that when he discussed the country’s election on Last Week Tonight he didn’t bother coming up with a clever definition for it — that’s how little he thinks about the country.

That said, Oliver does think the world should care about Canadian politics and the election that take place there on Oct. 19, basically because you would care if your next door neighbor started dating “a complete and utter d–head.” In Oliver’s opinion, that “d–head” is Stephen Harper, the current prime minister. Oliver is not a fan of Harper’s due to his “pandering to Islamophobes,” his “terrible, terrible band” named after a “French pun,” and his willingness to take photos with the lead singer of Nickelback.

Oliver really wanted to tell people not to vote for Harper, but it’s against Canadian law for a non-citizen to try to influence a Canadian election, the violation of which could result in a $5,000 fine or jail time.

But Oliver’s not scared of six months of Canadian prison and he can’t imagine a better away to spend a stack of Canadian cash. “If telling you not to vote for Stephen Harper is going to cost me $5,000, I’m going to get my money’s worth and do it in the most Canadian way possible,” declared Oliver. Then, accompanied by a beaver wearing a maple leaf shirt playing “Sweet Caroline” on the synthesizer along with a moose getting a colonoscopy under Canada’s health care system, Mike Myers dressed as a mountie driving a snowplow, urged people not to vote for Harper.

Then Oliver happily broke Canadian election law by declaring, “Stephen Harper doesn’t care about Muslim people.” He then made it rain Canadian dollars all over the stage. Who thinks Canadian politics are boring now? 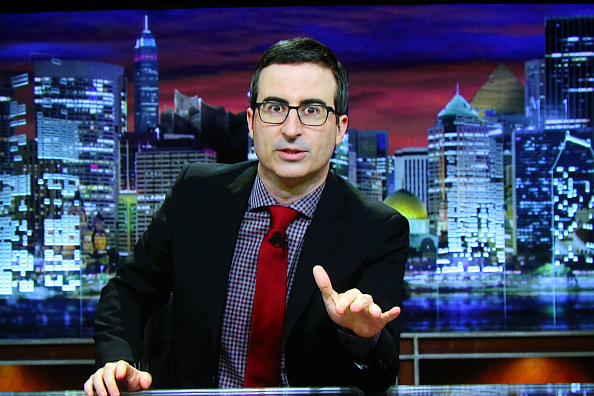