State and rebel leaders in Colombia agreed on Saturday to implement an unprecedented plan to locate, identify and return the remains of the tens of thousands of people who have disappeared in the country’s lengthy ongoing civil conflict, TeleSUR, a South American broadcasting network, reported.

The agreement, between the Colombian government and the left-wing guerrilla group known as the Revolutionary Armed Forces of Colombia (FARC), is a milestone in a bloody conflict that has spanned half a century, leaving 220,000 people dead and displacing 6 million more. More than 50,000 people are still missing, according to government approximations.

The FARC and other left-wing extremist groups claim to defend Colombia’s poor against state hostility in the name of communism; right-wing paramilitary groups use force to lash out against the left-wing guerrillas; the government says it merely seeks to establish stability and protect its citizens. Experts say that all three parties have abused human rights by either action or inaction in what has been described as the longest ongoing domestic conflict in the Western hemisphere.

Per the agreement, both FARC and the government will work to identify and retrieve the remains of their victims, with the state facilitating burials in cemeteries located in areas impacted by the conflict. It is the latest advance in a recent concerted effort to establish peace between the guerrillas and the Colombian government. A month ago, Colombian President Juan Manuel Santos and FARC leader Rodrigo Londoño Echeverri — known by his nom de guerre Timochenko — symbolically met in Havana to begin a six-month period in which a mutual peace accord will be drafted. 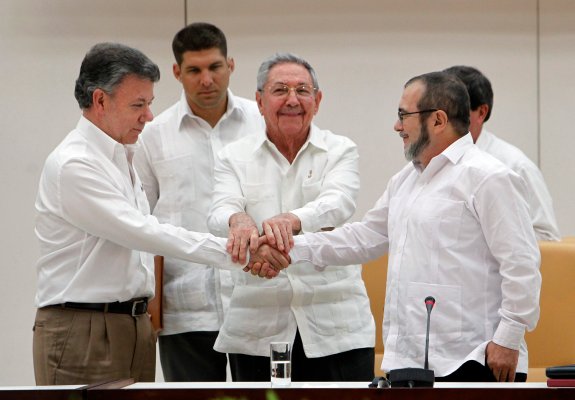 Latin America's Longest Conflict May Finally Be Ending
Next Up: Editor's Pick