“Find something to shoot!” bawls one of my squad mates in Halo 5: Guardians as I clamber onto a floodlit gangway. And so I do, sizing up swarms of hissing creatures that look like lava in armor, swiveling my gamepad’s control sticks. I am a strange, cyclopean thing that exists to shoot other things, and it’s easy to find them in Halo.

Halo 5: Guardians‘ bold idea isn’t just to subtract him from three-quarters of the game, but to play coy with his motives. For months Microsoft has been teasing an epic showdown between a mysteriously AWOL Master Chief and newcomer Spartan Locke, another super-soldier tasked with hunting Chief down. A pair of trailers staged in guttering wastelands showed the two on a collision course.

The first half of the game involves resolving that thread, as you alternate playing Locke leading his Fireteam Osiris squad sleuthing for Chief’s Blue Team, and Blue Team as it leaps down a rabbit hole I won’t spoil here, but whose narrative resolution lacks the subversive punch its setup implies. The novelty of a breezy space opera glossed with visual spectacle has worn a bit thin, and Halo 5 seemed pitched to upend at least some of those conventions.

In that sense the game’s campaign may be a letdown for players raring for this 14 year old series to find new ground. Microsoft got that ball sort of rolling earlier this year with its Hunt the Truth podcast, a clever This American Life pastiche about mere mortals coming to grips with the kinds of problems a Daniel Ellsberg or Edward Snowden would understand.

What happens in Halo 5‘s story, by contrast, feels disappointingly by the numbers, the mysteries not so mysterious after all, the archetypes shuffled back to their starting blocks by the finale. The big plot twist, where the game finally tries to provoke an emotional crisis, feels strangely underwhelming, its sentiment too one-sided given how sanguine and taciturn the story’s heroes are. The novelty of poring ourselves as players into the emotionally blank space where a person ought to be in these games may no longer be working.

Gunplay on the other hand feels dependably Halo-ish: brisk, uncomplicated and fierce. Story chapters are sprints through flamboyant playgrounds, designed to give you something gobsmacking to behold as you obliterate waves of attackers. And the game’s attacks are now augmented by a satisfying forward lunge that lets you topple foes and shatter barriers, and a ground slam attack that lets you target nearby enemies mid-leap.

But those enemies mostly carry over from the last installment, for better and worse, with only an occasional “take out the massive, multifaceted whatchamacallit” to break up the monotony. The sole newfangled antagonist—the closest thing Halo 5 has to a villain—feels a little rote, too, just a souped-up version of the last game’s malefactors with an operative rationale that by the end feels less inventive than lazily designed to fuel climactic battles that suffer from lackluster iteration.

The future of games like Halo—as with the Battlefields, Battlefronts, Call of Dutys and Destinys—lies arguably less in narrative disruption than catering to the burgeoning eSports crowd. Halo 5‘s saving grace may thus be its competitive online modes. Like Arena, the game’s vanilla blast-a-thon, where squeezing trigger-happy players into multilevel spaces with curling tunnels, climbable platforms and dead-end corners usually results in topsy-turvy, kinetic exuberance.

But it’s the game’s other more intrepid online mode, Warzone, that turns out to be Halo 5‘s best argument. Here, two 12-player teams square off across mammoth maps, aided by computer-controlled allies but likewise harried by computer-controlled foes. Warzone’s basic thrust isn’t new: capture and hold multiple strongpoints to lay vulnerable the other team’s base or beat them to 1,000 points through collective action. But once you’re plugged into the new REQ system–collectible cards that unlock weapons, armor and various vanity items dispersed in randomized packs purchased with points earned in matches—the possibilities multiply.

While only cosmetic REQ cards are allowed playing in Arena mode, the gloves are off in Warzone. Want to sprint faster? Tote extra grenades? Carry advanced weapons sporting ballistic extras? How about spawn vehicles at your base? Give your shields a boost? Swathe yourself in light-bending camouflage? All achievable if you’re persistent enough.

To avoid balance issues, Warzone staggers when certain REQ cards can be used—weakest at the start, strongest toward the end. Thus matches spool up slowly, shifting from simple skirmishes at the outset to chaotic land-sky battles by the end. That’s doubly important here, because while all of the REQ system’s 1,000-plus cards are attainable, Microsoft’s also allowing players to speed progress by paying $2 to $3 for REQ packs with real money. Restricting how and when the most powerful cards can be deployed is Microsoft’s attempt to have and eat its cake, turning on the micro-payment hose while theoretically mitigating pay-to-win. Whether it’s a workable idea remains to be seen.

If you’re a Halo fan, Halo 5‘s probably going to feel like coming home, a graphically muscled version of a formula that’s resonated with devotees since 2001. It’s just like the other annualized multimillions franchises, in other words, only with its installments shrewdly spaced years apart, to keep us inquisitive, and expectant. 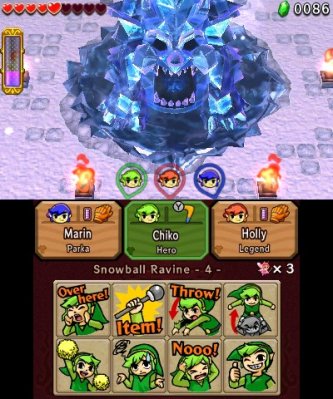 Nintendo's Latest Zelda Game Is its Most Quirky in Decades
Next Up: Editor's Pick