Why the E.U. Is Offering Turkey Billions to Deal With Refugees

A group of migrants land on a beach with a raft from Turkey onto the island of Lesbos in Sikaminias, Greece, on Oct. 19, 2015.
Spencer Platt—Getty Images
By Naina Bajekal

Under intense pressure to stem the flow of refugees into Europe, German Chancellor Angela Merkel made a weekend trip to Istanbul, where she pledged to push forward Turkey’s long-delayed bid to join the European Union in return for cooperation in dealing with the worst refugee crisis the international community has seen since the end of the Second World War.

Merkel’s trip followed a Oct. 15 summit in Brussels, where—for the fourth time in six months—European leaders grappled with the wave of migration headed toward the continent. This time, rather than arguing over refugee quotas or funding for search-and-rescue operations in the Mediterranean, they turned their attention to the newest gateway of the exodus: Turkey.

Turkey is now the main transit country for Syrian refugees and other migrants: nearly four-fifths of the more than 615,000 people who arrived in Europe by sea this year left from Turkey’s west coast to reach nearby Greece via the Aegean Sea. The migrants come from Afghanistan, Iraq, Eritrea and elsewhere, but the vast majority are Syrians. With the Syrian civil war approaching its fifth year, the U.N. refugee agency noted large numbers of Syrian refugees in camps are sinking deeper into abject poverty due to a shortfall in aid from the international community. Various factors have brought about the surge in migrants this year, but rapidly deteriorating conditions in refugee camps in Jordan, Lebanon and Turkey have played a major part in driving the exodus of people risking their lives to reach Europe.

Turkey alone is hosting more refugees than any other country in the world, including some 2.2 million Syrians fleeing their country’s civil war. Unlike Syria’s much smaller Middle Eastern neighbors, it is the only country in the region with enough resources to do more to help—as Europe has belatedly realized.

“Turkey plays a key role in this situation,” Merkel told the German parliament on Oct. 15. Germany expects to take in 1 million refugees in 2015 alone, compared to a total of 200,000 for the whole of 2014. Merkel, hailed as a hero for welcoming far more refugees than any other European country, is increasingly coming under pressure from her own conservative base to slow the pace of refugees arriving. At an Oct.14 meeting of her party, local officials called Merkel’s strategy a failure and called for her ‘dethroning.’ Among the broader public, she faces a growing backlash over the refugee crisis: her personal approval ratings have dropped to a four-year low. Meanwhile a rising tide of anti-migration sentiment is becoming harder to quell: on Saturday, Henriette Reker, a German city official was stabbed in the neck over her work with refugees.

Facing the hard reality of how to deal with the newcomers, Merkel introduced temporary border controls in September, but resisted demands to turn away migrants arriving from Hungary and Austria or to seal the border. In a bind, she is looking to Turkey to help reinforce the E.U.’s external frontiers.

Merkel’s offer on Sunday to jumpstart Ankara’s protracted E.U. membership talks highlight just how crucial Turkey is for this new strategy. Formal discussions over admission to the bloc began in 2005 but stalled in the wake of human rights concerns. Merkel was a long-standing opponent of Turkey joining the E.U., on the grounds of its refusal to open up its ports to E.U. member Cyprus. In 2013, she blocked new accession talks in the wake of Ankara’s crackdown on protestors and Merkel even reiterated her opposition to Turkey joining the E.U. earlier this month. Now, however, she has also agreed to help Turkey in its long demands to get easier visas for Turkish citizens who wish to enter the borderless Schengen zone of Europe. (Turkey is the only formally-accepted candidate for E.U. membership whose citizens are yet to qualify for this.)

At Thursday’s summit, E.U. officials reached agreement on an action plan for Turkey to cope with the emergency, offering the country a significant increase in financial aid. The European Commission had previously said on Oct.6 that it would mobilize up to €1 billion ($1.1 bn) but Turkey has asked for at least €3 billion ($3.4bn) in an initial phase – suggesting the overall total could be much higher. Merkel has given her support for increased aid but officials have yet to decide on a fixed sum.

Speaking on Friday, Turkish Foreign Minister Feridun Sinirlioglu called the E.U.’s proposed financial package “unacceptable,” pointing out that Turkey has already spent $8 billion so far taking care of Syrian refugees and noting the vast difference in the size of their economies: Turkey’s GDP is about $820 billion, less than 5% of the E.U.’s $18 trillion economic size. Prime Minister Ahmet Davutoglu echoed those sentiments when speaking to reporters on Sunday. “The sharing of the refugee burden should be fair,” he said. “Turkey has been left alone in recent years.”

The E.U. action plan comes after weeks of a behind-the-scenes push from Germany, France and Italy to secure a deal with Ankara. Turkish officials have been keen to stress that the plan is far from finalized but analysts say the mere fact that E.U. leaders have agreed on a plan marks a notable shift in approach from the summer, when they struggled to reach a consensus on the relocation of 160,000 migrants, a tiny proportion of those who have arrived in Europe this year.

“It’s the first step in the right direction,” says Demetrios Papademetriou, president of Migration Policy Institute Europe. “The European Commission so far has not focused on the crisis itself, it has focused on the politics of relocation. Now it seems we are at the very beginning of a process in which Europe is beginning to act as a sovereign state and reconsidering whether resources would be better spent in the region rather than in emergency measures to absorb hundreds of thousands of people.”

As the frontline state on the issue— Turkey decided to adopt an open-door policy for Syrians after the civil war broke out in 2011—Ankara now has the leverage to push for other concessions. Cooperation with the E.U. would mark a political victory for President Recep Tayyip Erdogan, who has become a near pariah: he has reignited conflict with the country’s Kurdish minority, arrested critical journalists and other opponents, all while his country has experienced the worst levels of violence since he came into power in 2002—with a deadly terrorist attack in Ankara on Oct.10 killing at least 97 people. But the somewhat toxic leader is keen to make headway with Europe, with pro-government newspapers hailing Thursday’s E.U. action plan as a victory—one headline announced “U-turn from Merkel, Turkey is getting what it wants.”

The timing of Merkel’s visit to Turkey, less than two weeks before snap elections in which Erdogan’s party hopes to regain a parliamentary majority after losing a vote in June, has therefore raised eyebrows among activists, who accuse European leaders of trying to buy off Turkey in order to relieve the migrant flow. Desperate to engage with Ankara over the migrant crisis, Brussels has even delayed the European Commission’s annual report on Turkey’s E.U. membership application until after the November elections – a report that was expected to contain heavy criticism of Erdogan’s autocratic rule and disregard for E.U. principles of freedom of expression. Delaying the report’s publication was one of Turkey’s demands in the migration negotiations.

French President François Hollande said in September that Europe must work with Turkey to ensure the refugees “can stay there, find a job, and wait for the situation in Syria to improve.” Andrew Gardner, Amnesty International’s Turkey researcher, disagrees with such an approach, saying in a statement: “A deal premised on keeping refugees in Turkey fundamentally ignores both the challenges they face there and the obvious need for the E.U. to offer protection to a greater share of the world’s burgeoning refugee population.”

Analysts say that even if Turkey receives a lot more financial aid, it won’t be able to act as a permanent buffer zone unless a political solution to the Syrian conflict is eventually reached—which is looking ever less likely. And as countless border control measures have shown in the past, placing restrictions on one migration pathway will simply shift the bulge to other, riskier routes—notably the long Mediterranean sea crossing from Libya to Italy, which has claimed 2,800 lives already this year, despite the fact that the number of people using that route has actually dropped since 2014.

“The only way people will be persuaded not to go to the Aegean Islands or Italy or Spain is if there’s a realistic chance that they can get humanitarian aid, feed themselves, have their kids educated and work elsewhere,” says Papademetriou. “They need to be persuaded that they will be resettled in massive numbers—at least half a million people a year—as part of a global program with Europe leading the way.”

A scheme of that ambition remains far off: since 2013 countries around the world have pledged to resettle fewer than 100,000 Syrian refugees of the more than 4 million living in desperately underfunded camps in the region. It’s more likely that European leaders, including Merkel, will now continue to look toward Turkey for quid pro quo arrangements that ease political pressure on them at home. Aware that his country is now indispensable to Europe, Erdogan appears to be holding all the cards in negotiations. That could be the boon he needs to secure victory in November.

Read next: Meet the German families who opened their homes to refugees 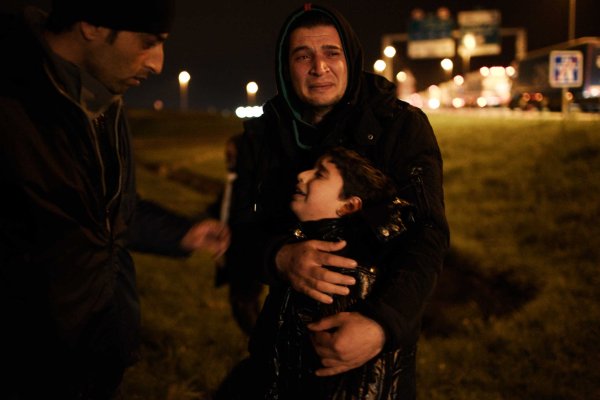 Witnessing the Death of a Syrian Refugee in Calais
Next Up: Editor's Pick