Last December, 22-year-old Baha Allyan posted a list on Facebook of things to be done after his death. Number one on that list: “I ask that the political parties do not claim responsibility for my attack. My death was for my nation and not for you.”

On Tuesday, Allyan, a graphic designer from the predominantly Palestinian neighborhood Jabel Mukaber, was killed by Israeli security forces after he and another assailant killed two passengers in an attack on a Jerusalem bus. A third victim, a U.S.-born teacher, died two weeks after the attack.

All the roads into the Palestinian East Jerusalem neighborhood are now blocked. Some are completely shut with cement blocks, while others have become checkpoints manned by Israeli soldiers. Micky Rosenfeld, a spokesman for the Israeli police, says they have locked down Jabel Mukaber because three of the attackers in this week of violence came from this neighborhood.

In a sandwich shop in Jabel Mukaber, men watch footage of clashes on Palestinian television. Youth throw rocks, and Israeli soldiers respond with a barrage of tear gas. “No one is encouraging these youth,” says Hamdan Hadid, a 20-year-old Palestinian who works in the shop. “They are encouraging themselves.”

The second intifada was largely organized and lead by Palestinian political factions. Attacks were planned and executed, and groups claimed responsibility. But this recent wave of attacks— in which seven Israelis have been killed and dozens more injured—has been carried out by what Israeli authorities call “lone wolves,” young Palestinians acting without instruction from any leader. At least 30 Palestinians have also been killed. “If there was a Palestinian leadership encouraging these youth, the Israeli forces would be the first know about it,” says 24-year-old Alaa Obiedat.

For Palestinians in Jabel Mukaber, life was tough even before the latest restrictions. Towering blocks of Israeli settlements line the roads into the neighborhood. The Palestinians here pay taxes like Israelis residents, but receive comparatively few services. The streets are filled with potholes and Palestinian residents are restricted from building new homes or expanding existing ones, even as Israeli settlements rise around them. Frustrations are simply boiling over.

“The people you see out on the streets and clashing are expressing their anger at the hard conditions they live,” says 24-Obiedat. Obiedat is lucky—he has a job working construction—but on Thursday he didn’t go to work, fearing he would waste hours of waiting just to get in and out of his neighborhood.

For young Palestinians in Jerusalem and the West Bank this anger and resentment has no political outlet. They are part of what has been called the Oslo Generation—those raised on the promise of peace and an independent Palestinian state laid out in the Oslo Accords signed in 1993 by Yasser Arafat and Yitzhak Rabin. Instead, two decades later, they have hundreds of thousands of new Israeli settlers on some of the territory promised to them in the Accords, territory that remains under Israeli military control.

“It’s a joke,” says Ismail Shkrat, 23, standing outside his family’s lamp shop. From here he can see the edge of an Israeli settlement a few hundred feet away and the separation wall in the distance that slices through Jerusalem neighborhoods. On the road in front, a line of Palestinian vehicles wait to pass the Israeli checkpoint.

“The Zionists thought this generation would be concerned just about their daily lives,” says Shkrat. “But [they have] realized there is no hope.”

That despair is paired with a feeling, for most youth, that the Palestinian Authority and its President Mahmoud Abbas do not represent them. The PA’s writ does not run in East Jerusalem and in the West Bank, most young Palestinians have never had the chance to vote for the Palestinian Legislative Council—the last elections were held nearly 10 years ago and have been repeatedly postponed since. In that time, little has been done to improve the conditions on the ground for Palestinians.

“Mahmoud Abbas is always willing to have a press conference, but he’s not willing to support his people,” says 17-year-old Muhtaseb, who did not give his last name. Palestinians in East Jerusalem accuse the PA of corruption, and say it is interested only in catering to the international community. “I don’t think that any of us would be willing to have a leader tell us how to fight for our nation,” says Muhtaseb.

After decades of a struggle dominated by divided political factions, it’s possible, Palestinian youth are looking for a new way to fight for their cause. “Don’t plant hate in my son’s heart,” wrote Allyan as his fourth request, “let him discover his nation and die for his nation on his own, instead of revenge for my death.”

This story has been updated to give a fuller account of the attack. 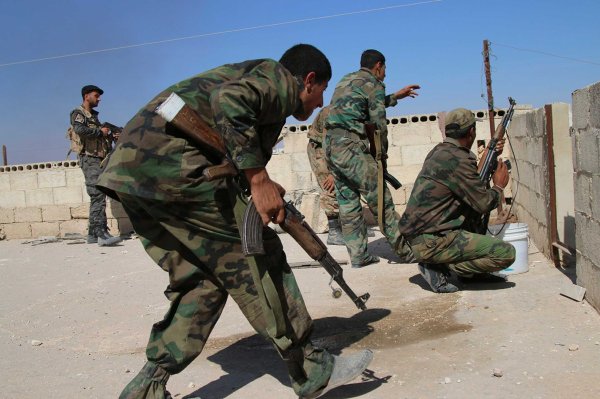 Syrian Army Musters With Iranian Troops to Retake Aleppo
Next Up: Editor's Pick