Rand Paul Campaign Promises That He Is 'Here to Stay'

Sen. Rand Paul has a message for the media: don’t count us out.

In a memo released Thursday, top advisers to the Kentucky Republican enumerate the hidden strengths of his struggling presidential campaign, arguing the candidate’s superior turnout effort and organizational depth will lift him to victory when it counts early next year.

“Ground game and political organization have a disproportionate impact in primaries and especially caucuses,” write Doug Stafford, Paul’s chief strategist, and Chip Englander, his campaign manager. Paul, they say, “has the best organization in America.”

The missive pushes back against the spreading sense that Paul’s prospects are dimming. The Senator is buried in the polls and on the cusp of missing the cut for the next Republican presidential debate. His fundraising has been anemic.

The crossover coalition he wanted to build hasn’t materialized. As it turns out, he’s not traditional enough for the mainstream, not libertarian enough for acolytes of his father. One of Paul’s closest confidantes, a relative who was heading up his super PAC, is currently on trial in Des Moines in connection with an alleged endorsement-for-pay conspiracy.

Paul’s campaign is grasping for fresh ways to shake things up: this week it streamed an entire day on the campaign trail in Iowa. But the broadcast came off like the death rattle of a dying campaign.

“This whole thing is embarrassing,” sniffed conservative pundit Erick Erickson, a one-time supporter, in a column entitled “Rand Paul, It Is Time to Take Your Campaign Out Back and Shoot It.” The livestream’s viral moment was a cranky candidate in a fit of pique, responding to an Internet question over whether he is still running for president:

But beneath the “false narrative” that Paul is “on the ropes,” the campaign has been quietly building a ground game that can carry him to victory in early primary and caucus states, the memo argues. In Iowa, where “a strong ground force, not money, is the true game changer,” Paul has lined up co-chairs in all 99 counties and 600 precinct captains. In New Hampshire, the campaign has a leadership team of more than 300. This organizational muscle, the memo argues, is showing up in Paul’s succession of straw poll victories.

The campaign is also touting its strategy of galvanizing college students. Paul believes his libertarian-leaning pitch resonates with college kids; his team has assembled some 350 student chapters. “They have questions about death and war and civil liberties,” Paul told TIME in an interview. “They’re more into that than people who are out there in their working career worrying about their next paycheck.” In the sparsely attended Iowa caucuses, lining up some 10,000 college-age supporters could lift Paul to victory, advisers say.

“Students make the calls and walk the doors. They also give the campaign the ability to organize cheaply in later states,” the memo argues. “And in Iowa, Students for Rand will have a huge impact.” The strategy in Iowa is bolstered by timing: unlike four years ago, the caucuses are scheduled for a February evening when school is in session.

And Paul’s polling numbers aren’t as dire as they appear, according to the memo’s authors. “No question, he will be on the stage” at the next Republican debate on Oct. 28 in Colorado, they write. (According to the criteria set by the organizers, Paul is currently eligible.) And though his bank account may not be flush, with a “lean campaign heavy on organization,” the memo argues, Paul has “the financial resources to continue indefinitely.”

“The media is fixated on insisting that [Paul] should get out of the race even though he continues to win every time votes are counted and the polls show him on the rise,” Stafford and Englander write.

It wouldn’t be the first time a candidate defied the pundits’ obituaries. Polls and political insiders wrote off Rick Santorum in 201 until just before he stormed back to win the Iowa caucuses. Sometimes the signs of a successful campaign aren’t apparent until the moment they become obvious.

This is unlikely to be one of those times. Take the latest CNN/ORC poll of Nevada, a tiny caucus state with libertarian tendencies. It’s tailor-made for Paul, and a test tube for the campaign’s claim that its ground game will carry him to victory. This week Paul notched a paltry 2%.

Read Next: The Reinventions of Rand Paul 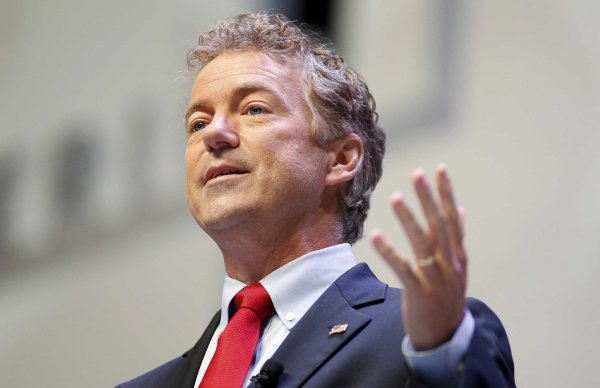 Rand Paul Goes Back To School Looking for Votes
Next Up: Editor's Pick