Brie Larson Finds a Room of Her Own

One of the most haunting scenes in Room isn’t something audiences even see. Five-year-old Jack (Jacob Tremblay) has spent his whole life in a 10-by-10-ft. shed where his kidnapped mother has been imprisoned for the past seven years–only he doesn’t know they’re trapped. Each day his mom (Brie Larson) tries to make his childhood normal with exercises and games, and each night she hides him in the wardrobe to shield him from seeing the sexual assault she endures from her captor. Viewers are right there with Jack, peering through the cracks, hearing only the bed creak, which is more than evocative enough. “None of us needed to come with our trauma paintbrushes and add extra colors to it,” Larson says.

It’s one of the many ways that Room, the film adaptation of Emma Donoghue’s 2010 novel of the same name, plays with perspective to great effect. Directed by Irish filmmaker Lenny Abrahamson and written by Donoghue herself, Room alternates between shaky camera work at Tremblay’s height and still shots from Larson’s to create competing senses of childlike wonder and grownup claustrophobia. It’s also the rare film to shine a light on the aftermath kidnapping survivors face once their ordeal is over.

Stories like those of Austrian woman Elisabeth Fritzl (who was imprisoned by her father for 24 years and bore him seven children) or Ohio man Ariel Castro (who kept three women in his house for about a decade) often become media sensations. But more than half of Room‘s running time explores what happens after they return home. The escape scene, suspenseful even for those who’ve read the book, isn’t a plot point to be spoiled. Instead, it’s the moment when the film cracks open and a mother’s struggle to reintegrate becomes the movie’s emotional core.

“This woman that seems to have it together, given the circumstances, falls apart,” Larson says. “[When] things are scary, your brain goes into superhero mode. That’s not the moment when you cry–it’s afterwards, when the brain has time to reflect.”

Larson, 26, had a breakout role on the Showtime series United States of Tara and appeared as Amy Schumer’s sister in this summer’s Trainwreck, but it was her starring turn as a counselor for at-risk teens in the 2013 indie hit Short Term 12 that made her a critics’ darling. Room may bring her more acclaim still; the film won the People’s Choice Award at this year’s Toronto International Film Festival, a solid predictor of a Best Picture Oscar nomination.

To prepare for the role, Larson avoided sunlight for months and worked with a nutritionist and a trainer to understand the physical impacts of captivity. She also spoke at length with a trauma expert to understand how the brain functions during crisis, knowledge she draws on while explaining how the role nearly consumed her. “Your brain so badly wants to help you–it wants to constantly conserve energy,” she says. “You’re playing somebody else for 12 hours a day, so the only time I’m me is when I sleep. If you’re doing that for days and days, your brain starts to rewire itself.”

But instead of breaking her spirit, the heavy material instilled in Larson a renewed sense of gratitude. Every few days during filming, she’d call her mother, apologizing for the ways she misbehaved as a teen. She suspects Room will give viewers a similar feeling. “This isn’t a torture story. This isn’t a crime story. It’s about something that’s bigger than that,” Larson says. “It’s not people crying because the movie’s so sad–it’s because they feel so in love with the world again.” 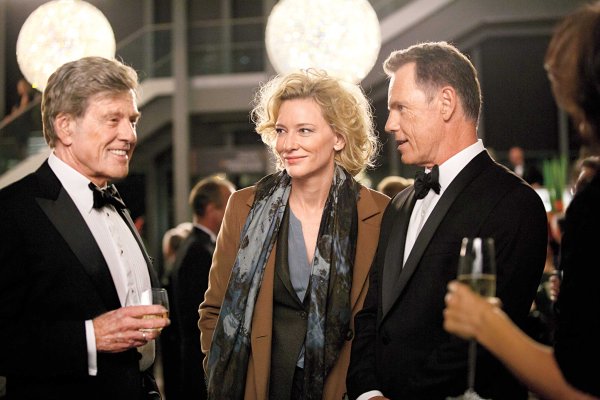 The Truth About a Network Anchor Dropped Overboard
Next Up: Editor's Pick