Brian Donovan is an actor and director of the documentary Kelly’s Hollywood.

I dreamed of marrying a good person. I wasn’t looking for saccharine sweet, but I needed someone who had good old-fashion values and an empathetic heart. So, in 2005, when I was on my first date with Tempany and asked her over candlelight dinner: “What is the thing you are most proud of?” and she answered: “That I’ve tried to be a good person,” I knew I had found The One. Tempany was a good person and everything I’d been looking for: smart, assertive, talented, sophisticated yet childlike in her curiosity and excitement, kind and caring.

It was a whirlwind romance filled with impromptu midday hookups, long walks and stimulating talks about movies and books, and spontaneous “passport required” adventures away. I was smitten. But less than six months later when she said: “I’m supposed to be your other half, but there’s already a half there,” I knew we were in trouble.

I had heard those similar words before from past girlfriends regarding my little sister, followed by: “You’re obsessed.” The relationships quickly turned to category five hurricanes with much damage and a zero survival rate. How Tempany and I ended up reciting our vows on the North Shore of Oahu under sunny skies and having two kids later is nothing short of a miracle.

I was obsessed with my little sister, Kelly. Our close bond and soulmate status can be traced back to our early childhood in the 70s. We would sing with toy microphones and dance for hours in my bedroom to the Saturday Night Fever and Grease soundtracks. We both loved to perform, especially for each other, and glowed from the attention and adoration we gave one another.

When I left home in the 90s to pursue an acting career in Hollywood, I missed her so much that we eventually figured out a way to have her come stay with me for two months every year. When I picked Kelly up for our annual visits, she would run across the room, jump in my arms, look me in the eyes and say: “Thank you for saving me.” She made me feel like a superhero with a sense of purpose, and rewarded me with unconditional love and devotion. During this time we were inseparable and gobbled up as much as Hollywood had to offer—we even finagled our way onto the back of the Bee Gees’ tour bus so Kelly could squeeze her man, Robin Gibb, while 50,000 eager fans at Dodger stadium chanted for them to get on stage.

I hate that I have to explain this next part, because I don’t want to be another person who tries to distill something very complex down to a label—as if to say: “That explains everything.” More important, I want to believe that it doesn’t matter. But if I’m honest, it is our story: My sister was born with Down syndrome.

It was 1969 and long before Becky was on Glee. It was so different then that when my sister was less than a day old, the doctors told my mom she should institutionalize her. In 1975, when Kelly and I were still in our single digits and running through the sprinkler on our front lawn, some kids from my school came by and asked: “Who’s the retard?” As my neighbor Mrs. Hasseley tells it: “I let you get a few punches in before I stopped it.” A few years later, Kelly passed a man and his son at the library and the boy reached out to say hello and the dad yanked his hand away and said: “Don’t touch her!”

That was the day I started to sew my cape on, and my life’s mission was sealed: I was going to protect Kelly and prove she could be more than what society branded her, and most important, make sure she knew that I loved her no matter what and above all else.

But of course, neither life nor love is experienced in a bubble, and things change. When I tried to share my life with someone else (i.e. a girlfriend), that once unimpeded mission became more difficult and strained, especially when said girlfriend wanted to be my new mission, my new obsession.

There was one who loved writing notes that always started with: “Why can’t you ever say no to your sister?” followed by, “You make me feel so last place!” Another demanded: “Why is there a picture of Kelly on your desk, but none of me?”and “Why does Kelly sleep in your bed with you? Why can’t Kelly sleep in the living room when she visits?” And another, my only live-in, who asked one night: “What if something happens to your parents? Where will your sister go?” We both knew the answer.

In hindsight, I could have handled the issue with my sister better. I could have created the boundaries all of the girlfriends clamored for. But I believed in unconditional love and couldn’t understand why there were so many conditions. It pains me to say that unconditional love is impossible. It pained me even more when I met Tempany and I had to admit it.

It was about six weeks into Kelly’s annual two-month visit when the elephant reared its head again, and Tempany uttered those fateful words: “I’m supposed to be your other half, but there’s already a half there.” I knew I couldn’t rebuff with the usual retorts, but I tried anyway: “This is nonnegotiable. I told you how it was when we first got together.” This didn’t go over very well, but I was on a rat wheel and didn’t know how to change direction or get off. I was delusional in believing that if I finally found the right “good person,” and Tempany really loved me unconditionally, she would succumb to taking a backseat to my relationship with Kelly. But, of course, this was a condition, too. My self justification and past demands had come back to bite me, and my dream wife was quick to point it out.

We sat in silence most of the night, afraid that what we said next might lead us further down the path of no return. Eventually Tempany softly said: “I need to know that I’ll be the other half someday. I need to trust that you would place my needs above Kelly’s if it ever came to that.” I froze. How could I do that? How could I abandon my life’s mission of 38 years for someone I’d known for six months?

We eventually went to couples therapy, but I kicked and screamed for over a year there, too, especially when Tempany demanded change. Less than six months before our wedding, our therapist suggested we call it off. When we walked outside, Tempany said: “You need to choose.”

I wish I could say a magic love wand cascaded over us and my wretched stomach subsided and I chose Tempany. But we all know life isn’t that simple. What I can tell you is the session was a wake-up call for both of us. It wasn’t easy, bone crunching at times, sprinkled with tears and sadness from all of us as I tried to fulfill the compromises Tempany had pleaded for. I gradually told Kelly “No” more often and spoiled her less and less. I shortened her annual visits and made every effort to put Tempany’s needs first. Six months later we still didn’t have all the answers, and many things lingered, but we stood in the sand and stared into each others’ hopeful eyes and leaped anyway.

My wife and I have been together just shy of 10 years, and we joke all of the time that we “itched” for the first six. Our seventh was when we finally hit our stride. We still don’t have all the answers, but we continue to finds ways to compromise and embrace conditional love. And more important, Tempany became my other half by not forcing me to choose. She’s a good person indeed.

Brian Donovan is an actor and director of the documentary Kelly’s Hollywood. Connect with the film on Twitter and Facebook. 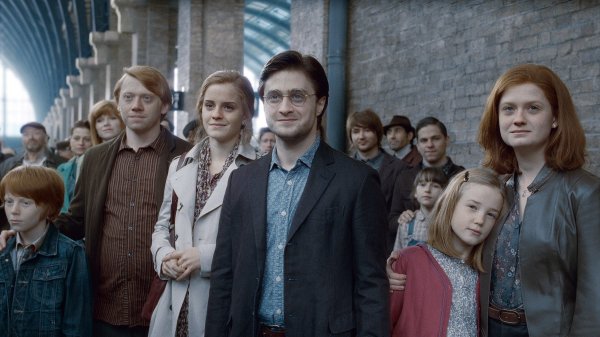 The Internet Did Not Enjoy Waiting in Line for Harry Potter Play Tickets
Next Up: Editor's Pick