Random House
Ideas
By John Danforth
John Danforth, a former Senator and U.S. Ambassador to the U.N., is the author of The Relevance of Religion: How Faithful People Can Change Politics.

Today’s Republican hardliners are angry, loud and insistent on getting their way. What they are not is conservative. They complain that in 2014 they went to the polls to give their party a majority in the House and Senate, but since then nothing has happened. Obamacare hasn’t been repealed and Planned Parenthood hasn’t been defunded, so “off with their heads.” After deposing John Boehner from the speakership and forcing his resignation from Congress, they have made Mitch McConnell their next target, and they have issued dire warnings of retribution to aspirants for future House leadership. They threaten not to extend the debt limit and to bring down the government by refusing to fund its operations unless they get their way. They are not conservatives; they are revolutionaries who all but say as much as they rail against what they call the “Establishment.” Why are they not conservatives?

Author Yuval Levin traces the origin of modern conservatism to Edmund Burke, the late eighteenth-century British philosopher and parliamentarian. Burke’s conservatism pertained less to his position on specific issues than to his understanding of how a decent society should function. He was a contemporary and observer of the French Revolution who was appalled by the radical upheaval in France where the entirety of the existing order was overthrown in a bloodbath and replaced by a mob. The essence of Burke’s conservatism was his belief that political change should be gradual and not revolutionary, and achieved through existing institutions. The result would be step by step change that would not be perfect in anyone’s eyes, but it would be better than the tyranny of absolutism that had terrorized France. For Burke, the greatest threat to society wasn’t some mistaken governmental policy, but absolutists so certain of their own opinions that they would stop at nothing to force their opinions on the nation. No doubt, America is a far cry from revolutionary France, but Burke opposed precisely the rule or ruin approach to government taken by Republican hardliners.

Burke defended the monarchy and the aristocracy of his day as institutions that gave stability to eighteenth-century Britain. America has a different source of stability, a written Constitution that gives us the framework for making public policy while holding ourselves together as one diverse nation with many competing interests.

While some hardliners, calling themselves “Constitutional conservatives,” seem to focus entirely on freedom of religion and the right to bear arms, the body of the Constitution sets out the structure in which the federal government operates. Article I vests in Congress the policy making function of government, beginning with the first of the enumerated powers, “to lay and collect taxes.” Traditionally, conservatives have zealously championed Congress’s policy making power against what they consider an activist judiciary that “legislates from the bench.” Similarly, conservatives have insisted that large questions of public policy should be decided by the legislative process and not by presidential fiat through executive orders. Because conservatives champion Congress as the locus of federal decision making, it is the special responsibility of conservatives to make sure that Congress functions. Today, it does not function, largely because hardliners would rather take rigid positions in order to placate their “base” than legislate.

The legislative process is, by design, complex and usually slow moving, and it fosters the evolutionary change that Burke thought essential to social stability. Navigating the process calls for compromise and leads to results that are generally imperfect by everyone’s standards, but avoid the extremes that alarmed Burke in the French Revolution. The essence of conservatism is not to insist on extreme positions, but to respect the process that avoids them. It is to put allegiance to the Constitutional system with all its imperfect consequences above demands for specific policy results.

The demand by Republican hardliners and their media supporters that members of Congress never compromise and push their positions to the point of shutting down the government has brought us to the present state where the process carefully created by the framers of the Constitution is not permitted to function. Congress, the place where differences should be addressed and hopefully resolved, is rendered inoperative by the issuance of non-negotiable demands. The result is that the gradual evolution of public policy that defines conservatism is blocked. Congress is no longer a place where Americans work through our differences on important matters; it is a place to state positions on a take it or leave it basis. Instead of slow movement toward some constructive end, there is no movement at all. This is not what the framers of our Constitution intended. The hardliners are not conservatives.

John Danforth, a former Senator and U.S. Ambassador to the U.N., is the author of The Relevance of Religion: How Faithful People Can Change Politics. 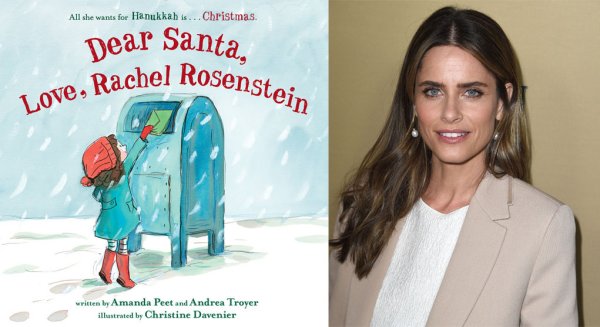 Amanda Peet on Her Book, Togetherness and the Fate of Jon Snow
Next Up: Editor's Pick