In March 2015, officials discovered that a Liberian man who had survived Ebola had possibly passed the virus on to his female partner many months after it was thought to be safe for a survivor to engage in sexual activity. Genetic material of Ebola was identified in the man’s sperm 175 days after he had developed symptoms, which is 74 days more than any previous cases studied at the time.

Following the report, health officials changed their guidelines that previously recommended Ebola survivors abstain from sex for three months, which was how long experts thought Ebola remained in semen. The U.S. Centers for Disease Control and Prevention (CDC) amended their guidelines to recommend that survivors abstain from sex or use a condom for the foreseeable future until “more information becomes available.” It wasn’t that the health officials had been giving out bad advice, it was just that while experts suspected Ebola could be transmitted sexually, it hadn’t happened before that case.

Now, health experts have more information, as two studies published in the New England Journal of Medicine on Wednesday shed light on Ebola as a sexually transmitted disease.

In one of the studies, researchers looked at the genetic profile of the Ebola strain that the Liberian man passed to his partner, and confirmed direct transmission from the man to the woman, suggesting the sexual activity was how the woman was infected.When the case was first reported in the spring, health officials changed their guidance, but this study more definitively confirms that Ebola could be sexually transmitted. The woman ended up dying from the infection, the male survivor is alive.

The report is the first of an ongoing long-term study in collaboration with the Sierra Leone Ministry of Health and Sanitation, the World Health Organization (WHO) and the CDC. “Ebola survivors face an increasing number of recognized health complications,” said CDC director Dr. Tom Frieden. “This study provides important new information about the persistence of Ebola virus in semen and helps us make recommendations to survivors and their loved ones to help them stay healthy.”

As TIME previously reported, scientifically, the testes are thought to be immunologically “privileged” sites, meaning it’s easier for the Ebola virus to go undetected and avoid being attacked by the immune system in the reproductive system. The researchers could not determine in their study why some men were able to clear the virus faster than others. The researchers are also working to determine whether these identified fragments of the virus in the semen are infectious.

The CDC says that until more is known about how Ebola can be passed sexually, the over 8,000 male Ebola survivors in Liberia, Sierra Leone and Guinea need to be counseled and undergo regular testing to monitor whether the virus continues to be in their semen. They also need take precautions so as not to infect their partners. “Until a male Ebola survivor’s semen has twice tested negative, he should abstain from all types of sex or use condoms when engaging in sexual activity. Hands should be washed after any physical contact with semen,” the CDC says.

Never before has there been such a large number of Ebola survivors, and researchers are still learning what the aftermath of the disease could mean for these former patients. In some cases, Ebola survivors have reported a variety of symptoms including pain, vision loss, and memory problems. Though cases of Ebola have dropped significantly, the new research offers a deeper understanding of the disease, and what continued care survivors may need. 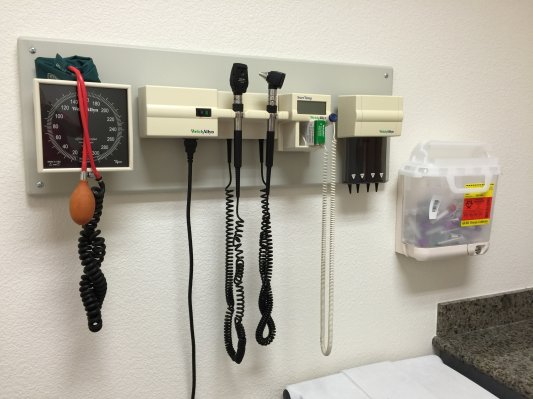 There's No Evidence You Need an Annual Physical: Study
Next Up: Editor's Pick