The Story Behind the Democratic Debate's Final Question

In the final round of the Democratic debate on Tuesday night, moderator Anderson Cooper posed a question to the candidates: “Franklin Delano Roosevelt once said, ‘I ask you to judge me by the enemies I have made.’ You’ve all made a few people upset over your political careers. Which enemy are you most proud of?”

The answers this time around were varied: the coal lobby for Lincoln Chafee, the NRA for Martin O’Malley, Wall Street for Bernie Sanders, an enemy soldier for Jim Webb and, in addition to several others, the Republican Party for Hillary Clinton. For FDR, when he used that line—or, rather, a version of that line, which is often misquoted—in 1932, the enemies to which he referred fell somewhere between Sanders’ answer and Clinton’s.

The line (which did not actually include the words “I ask you to”) comes from a speech that the future president gave during the campaign season preceding the first of his many successful bids for the White House. In September of 1932, he spoke to a crowd in Portland, Ore., on the topic of electrical power. Though it may well have been a rousing oratory, which FDR certainly knew how to deliver, the speech was actually rather low on the soundbites. Instead, it was a long and detailed description of an ongoing problem with the way that public utilities were regulated in the United States, complete with the history of public utilities going back 300 years to the regulation of ferry boats under King James of England. It did, however, conclude with a few good lines—including that quote:

Roosevelt’s tough stance toward utilities likely came as no surprise to his audience. During his time as governor of New York, Roosevelt had made an effort to increase regulation and price control for utilities, especially electricity, which as he pointed out had recently make the shift from luxury to necessity. He campaigned as an advocate of federal regulation of utilities, especially in the wake of a recent crisis spurred by the financial meltdown of electricity tycoon Samuel Insull.

To prevent a repetition of the Insull situation, FDR said, greater regulation of utilities was necessary. “I have spoken on several occasions of a ‘new deal’ for the American people. I believe that the ‘new deal,’ as you and I know it, can be applied to a whole lot of things. It can be applied very definitely to the relationship between the electric utilities on the one side, and the consumer and the investor on the other,” he said. “True regulation is for the equal benefit of the consumer and the investor. The only man who will suffer from true regulation is the speculator, or the unscrupulous promoter who levies tribute equally from the man who buys the service and from the man who invests his savings in this great industry.”

President Hoover, the Republican incumbent, had only recently come around to a similar position, after taking a longstanding stance against regulation. The two candidates also differed on whether communities should have the right, in the absence of a private option, to start their own publicly held power companies. It was a question of particular import at the time when the government had recently started work on a project—a dam in the Colorado River—that could potentially provide electricity that would be the federal government’s to dispense with.

The hydroelectric resource in question would soon get a new name—the Hoover Dam—but FDR would be the one to win the election. 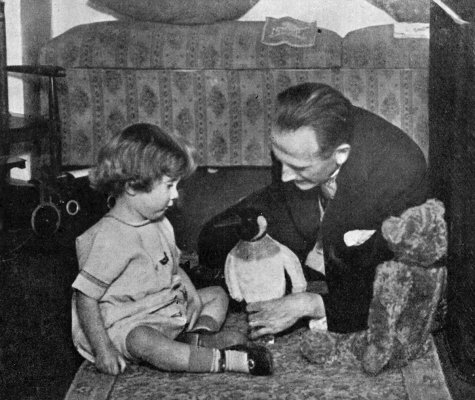 How Winnie-the-Pooh Got His Name
Next Up: Editor's Pick