In a few short weeks, the House of Representatives has gone into a complete tailspin. House Speaker John Boehner announced his impending resignation, his presumed successor Majority Leader Kevin McCarthy bowed out of a race, and the Republicans are wildly looking for anyone to take the job. In addition to prominent members of Congress like Paul Ryan and Trey Gowdy, there has also been a series of past elected officials mentioned—including Mitt Romney, Newt Gingrich and Dick Cheney.

The Speaker of the House is an unusual position—it is specifically called for in the Constitution, but there is no requirement that the Speaker actually be an elected representative. The Speaker is also second in line for the presidency, after the vice president, which raises the important question: Should someone from the opposition party who wasn’t even currently elected to office be in line for the highest office?

With the House in total disarray, it’s time to re-examine how we arrived at America’s current line of succession—and whether we should change it.

The first succession law, which was enacted in 1792, made the Senate President Pro Tempore second in line, with the Speaker right after him. This law was changed in 1886, following a two-decade stretch in which two presidents were assassinated, two vice presidents died of natural causes, and one president, Andrew Johnson, was impeached. At that time, Congress continually changed hands, so the new law put the unelected cabinet members, beginning with the Secretary of State, ahead of Congress in the line of succession.

The 1886 law stayed in place until 1947. At that time, Democrat Harry Truman was in the White House, and there was no vice president (the appointment of a vice president after a death or resignation only started after the passage of the 25th Amendment in 1967). Republicans controlled both houses of Congress and wanted to ensure that should anything happen, they would move up. They reverted back to the old law with one change—they now placed the Speaker of the House before the Senate President Pro Tempore.

The recent House Speakers would presumably have been up to the challenge of serving as president, but it seems less likely that many of the recent Senate Presidents Pro Tempore would have. Recent tradition has held that position be the filled by the longest-serving member of the majority party. The current President Pro Tempore is Utah’s 81-year-old Orrin Hatch. Former Senate Presidents Pro Tempore include 99-year old Strom Thurmond, who stepped down from his position of Senate Armed Services Committee Chairmanship, 92-year old Robert Byrd, who had to be removed as the chair of the Appropriations Committee because he was unable to do his job, and 88-year-old Daniel Inouye, who died in office.

There are many different opinions about who should be second in line. Harry Truman, among others, believed that the Congressional leaders should be second, simply because they were elected and not appointed. The Continuity of Government Commission has argued that Cabinet members should be second, in order to keep the president’s party in power and ensure that there is a clear chain of succession in the midst of what could be a very complicated turnover process.

The important thing is that we have a constant and competent leadership during a crisis. History has shown we need to have a plan: Just go back to April 14, 1865, when Abraham Lincoln was assassinated, Secretary of State William Seward was stabbed, and Vice President Andrew Johnson and General Ulysses S. Grant were targeted.

The “Who wants to be the Speaker” show in the House has already started a political paralyzation in the capital. But the fact that the line of succession is in play means that now is a good a time as any for a serious discussion of how to make sure that in case of a disaster, future possible presidents are actually able to do the job. 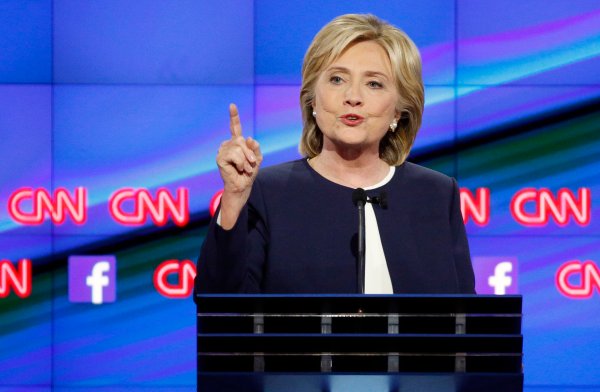 The Democratic Debate Was a Clear Win for Clinton
Next Up: Editor's Pick