Planned Parenthood announced Tuesday that it will no longer accept reimbursement to cover the cost of fetal tissue donations. The move comes in response to a series of videos released by anti-abortion activists that spurred a conservative campaign to withdraw federal funding from the group.

In a letter sent to Francis Collins, director of the National Institutes of Health, Planned Parenthood President Cecile Richards wrote that the initiative was a direct response to the “false claims” in the videos “about our role in fetal tissue donation into fodder to advance [an] extreme political agenda.”

“Planned Parenthood’s policies on fetal tissue donation already exceed the legal requirements,” Richards wrote. “Now we’re going even further in order to take away any basis for attacking Planned Parenthood to advance an anti-abortion political agenda.” The group said programs at its clinics that use fetal tissue for research would continue.

Richards wrote that the group’s decision to cover costs of fetal tissue for research “should not be interpreted as a suggestion that anyone else should not take reimbursement or that the law in this area isn’t strong.”

“Our decision is first and foremost about preserving the ability of our patients to donate tissue, and to expose our opponents’ false charges about this limited but important work,” she wrote.

Planned Parenthood faced criticism from conservative groups in a series of videos released by an anti-abortion group, the Center for Medical Progress, this summer. The videos showed activists posing as representatives of biomedical firms meeting with Planned Parenthood executives and negotiating prices for fetal organs.

The videos sparked a Congressional investigation of Planned Parenthood’s actions and a campaign to cut governmental funding of the group, culminating in Richards’ testifying on the Hill in September. 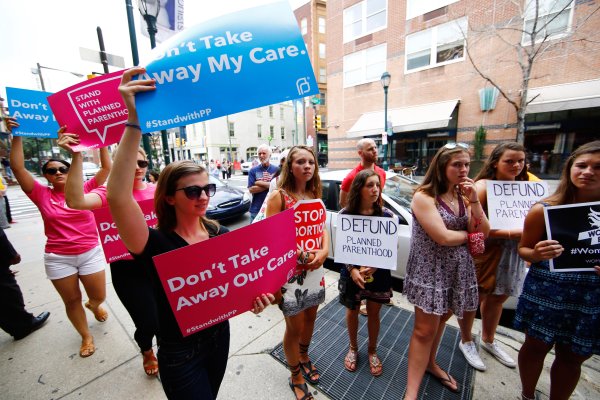 Planned Parenthood Will Give Free STD Testing While Being Grilled by Congress
Next Up: Editor's Pick