Democrats Pile on Bernie Sanders Over Gun Control at Debate

Hillary Clinton and Martin O’Malley went after Bernie Sanders on his gun control record at the Democratic debate Tuesday night, slamming him for voting against legislation in Congress that instituted background checks for gun purchases.

“Look at the fact that we lose 90 people a day to gun violence. This has gone on for too long,” Clinton said.

“All the shouting in the world is not going to do what all of us want and that is keep guns out of the hands of people who should not have those guns,” Sanders responded.

After former Maryland Governor Martin O’Malley also took a swipe at Sanders on the issue, Sanders said, “We can raise our voices, but I come from a rural state, and the views on gun control in rural states are different than in urban states, whether we like it or not. Our job is to bring people together around strong, commonsense gun legislation. I think there is a vast majority in this country who want to do the right thing, and I intend to lead the country in bringing our people together.”

Strengthening gun laws became a central issue in the Democratic Party after the Newtown shooting in 2012, which left 20 schoolchildren dead, and it has been an even more animating presence in the primary fight since the shooting at Umpqua Community College in Oregon this month.

But while Clinton, Sanders and Martin O’Malley have all called for expanded background checks, Sanders is the most vulnerable Democratic candidate on this issue. Sanders represents Vermont, a hunting state, voted against the Brady Bill gun-control law in 1993 and supported a 2005 law that gives gun manufacturers legal immunity if their weapons are used to commit crimes.

This has given Clinton an opportunity to clearly stake out a position to the left of Sanders, which she capitalized on by unveiling a new gun control plan after the Oregon shooting.

O’Malley also has a record of being strict on guns. He touted that record Tuesday by saying that while he’s glad candidates are talking about guns now, he’s “already done” a lot of what’s being discussed. He supports federal gun licensing and fingerprinting laws, as well as making illegal gun trafficking a federal crime. As Maryland governor, he helped enact some of the toughest gun laws in the country in the wake of Newtown.

He joined in the piling on Sanders, noting two members of the audience whose daughter died at the massacre at an Aurora movie theater. “You want to talk about a rigged game, Senator?,” O’Malley said to Sanders. “The game was rigged.”

Sanders defended his stance on guns saying that as the representative of a rural state he has to be mindful of his constituents wishes, but O’Malley retorted that it’s “not about rural and urban” traditions.

“We were able to pass this and still respect the hunting tradition,” O’Malley said.

Lincoln Chafee, then a Republican Senator from Rhode Island, voted against the controversial 2005 measure that Sanders backed.

Meanwhile, Jim Webb is arguably even more vulnerable on guns than Sanders, but his low poll numbers mean he’s much less of an important target for Clinton and O’Malley. Webb, a former Senator from Virginia, has had his own gun permit and once got in trouble when an aide brought one of his loaded pistols into the Capitol.

Read Next: Democrats Push for Gun Control Ahead of 2016 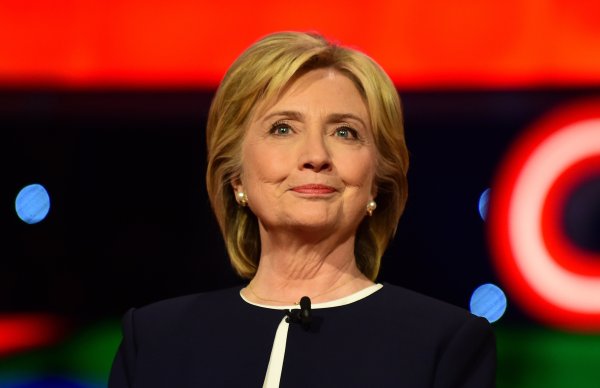 3 Ways Hillary Clinton's Rivals Attacked Her to Start the Debate
Next Up: Editor's Pick