What the Confusion Over Elections Says About Burma's Democracy

Supporters of the National League for Democracy wave flags during a rally ahead of the Nov. 8 general elections in Taikkyi township in northern outskirts of Rangoon on Oct. 10, 2015
Ye Aung Thu—AFP/Getty Images
By Charlie Campbell

Yet a deep anxiety undercuts the electoral exuberance in this impoverished Southeast Asian nation, which is officially now known as Myanmar. It is poised to escape a half-century of military dictatorship, but many fear the rug will be pulled from under at any moment — illustrated by the fatalistic reaction to Tuesday’s announcement by the Union Election Commission (UEC) that the long-awaited polls may be postponed because of widespread flooding and landslides.

This possibility, ventured following a meeting between the UEC and 10 political parties, hung in the air for just a matter of hours before a statement from the Ministry of Information insisted the vote would proceed on Nov. 8 as planned. “The UEC reviewed the opinions put forth by a number of political parties and has decided to go ahead with the election on Nov. 8,” read the statement. “There will be no delay.”

While postponement was apparently backed by the ruling Union Solidarity and Development Party (USDP), as well as several smaller parties, NLD spokesman Nyan Win told TIME there was “no good reason” for any deferral. “We are ready to fight for the election and the flooding and landsides are a very small matter when compared with the whole country,” he said.

According to Burma’s election rules, the UEC is allowed to delay the polls in the event of natural disasters. But while the flooding was undoubtedly severe — displacing 1.6 million people, claiming 100 lives and destroying 840,000 acres of farmland across almost half the country — the waters have largely receded and rebuilding efforts are well under way. Some voters did complain that identity papers were destroyed in the deluge, though these are not strictly necessary for voting, as informal identification — simply being recognized by township officials — has been deemed permissible for those already named on voter lists. Improvised polling stations are also easy to rig up in provinces where permanent structures have been destroyed.

A protracted delay would also have had significant consequences. Burmese law states that polling must be held between 90 and 30 days before the convening of the next parliament, which in this case is slated for Jan. 30. Around March, an electoral college between both houses of parliament will choose the President and two Vice Presidents.

Any deviation from this timetable could provide the powerful military with an excuse to temporarily seize control. This is especially perturbing in a nation that last had elections considered free and fair 25 years ago. That result — a resounding NLD victory — was annulled by the junta, and Suu Kyi spent most of the intervening years under house arrest. Once again enjoying popular support, the Nobel laureate is naturally loath to countenance any further delays.

That is not to suggest that her current situation is particularly rosy. Although the NLD is forecast to comfortably win the popular vote, this may not translate into the ability to form a government, owing to Burma’s widely condemned 2008 constitution, which reserves 25% of legislative seats for armed-forces personnel. The military-backed USDP of incumbent President Thein Sein, a former junta general, has also seen its popularity soar after rebranding itself as a bulwark against a chimerical Islamic fundamentalism, for which the country’s persecuted Muslim minority, the Rohingya, is unfairly blamed.

In addition, Suu Kyi remains personally barred from the nation’s highest office because she married a Briton and has two sons who are foreign nationals, provisions specifically drafted to curtail her political ambitions. In a recent interview, the 70-year-old insisted that she would still run the country even if one of her cohorts acts as proxy. “If the NLD wins the elections and we form a government, I’m going to be the leader of that government whether or not I’m the President,” she told the India Today television network.

This unflinching statement of intent likely irked those who penned the constitution, namely the former military top brass and comrades who jettisoned their green uniforms to take top positions in the USDP. Some observers say that the threat of postponement was to warn Suu Kyi not to overstep the mark. Others say it was a broadside in response to her refusal to attend Thursday’s signing of a landmark peace deal with ethnic armed groups.

Such theories proliferate as there is an overwhelming feeling that the military will not completely relinquish control, considering the enormous sums earned by crony business interests, especially in the extractive industries, and the prospects that a truly democratic government may seek a truth and reconciliation commission to prosecute those responsible for junta abuses. With the USDP slated to get 10% to 15% of the vote, on top of the 25% their military allies retain constitutionally, the situation is tightly balanced between the NLD and USDP, with ethnic parties — minorities make up around a third of Burma’s 51 million population — possibly playing kingmaker. Should they overwhelming ally themselves with the NLD, the prospects of a military intervention of some ilk — electoral irregularities, suspended voting in key areas or even fomenting unrest to declare a state of emergency— increases exponentially.

At the same time, any political calculation relating to the postponement debacle remains “incredibly opaque and hard to read,” says David Mathieson, senior researcher on Burma for Human Rights Watch, describing the UEC’s conduct so far during the campaign period as “capricious.”

That is certainly true. The UEC, which is partly funded by the U.S. government, has been under fire for error-strewn voter lists, allegedly disenfranchising over a million migrants, halting polling in ethnic areas that it does not consider secure, and rubber-stamping the state-level stripping of voting rights of the much-maligned Rohingya, who also number around 1 million people. Muddled messages are nothing new.

In addition, Wednesday’s front-page splash in the state-run New Light of Myanmar newspaper, headlined “No Election Delay,” was unequivocal enough to suggest that the postponement idea was not officially sanctioned. More likely, it seems, is that the longtime pariah nation is struggling with the logistics of competently organizing a legitimate ballot under the scrutiny of a largely unfettered press.

NLD supporters will be hoping this explanation holds true. “If we cannot change this government then nothing will change in this country,” says merchant seaman Aung Lwin Swe. A fervent Suu Kyi supporter, he is due to sail to Singapore late next month and so any delay to polling stood to scupper his chances of voting. “We have waited for long enough for these [elections] already.” 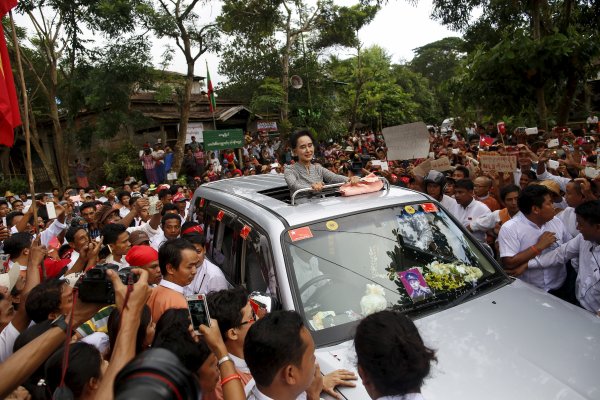 7 Factors That Will Define Burma's Elections
Next Up: Editor's Pick