A British senior citizen detained in Saudi Arabia last August, when authorities found bottles of homemade wine in his car, faces a sentence of 350 public lashes — a punishment he “would not survive,” his daughter told the BBC.

The children of 74-year-old Karl Andree have entreated British Prime Minister David Cameron to intervene, saying previous bouts of cancer have weakened their father, who also has asthma.

“He’s got a great spirit but his bodily health is not great and I just feel like he received his sentence and he did his time and I just want him home now,” Andree’s daughter, Kirsten Piroth, said to the BBC.

Andree is serving a yearlong custodial sentence. He was also sentenced to the public flogging upon the completion of his jail term, Reuters reports.

The Briton has spent the past quarter of a century working as an oil executive in Saudi Arabia, where, under Shari‘a law, alcohol is illegal. Last year, Saudi police arrested a 57-year-old Australian man named Peter Mutty who, like Andree, was found in possession of homemade alcohol. He served five months, in a jail cell alongside convicted murderers and a rapist, and received 28 lashes.

British officials say the case is being monitored closely.

“Our embassy staff are continuing to assist Mr. Andree, including regular visits to check on his welfare, and frequent contact with his lawyer and family,” the U.K. Foreign Office said. “Ministers and senior officials have raised Mr. Andree’s case with the Saudi government and we are actively seeking his release as soon as possible.” 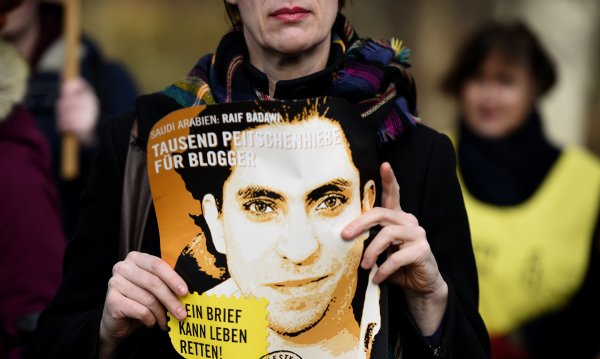