Sen. Rand Paul praised House Republicans’ most conservative members for effectively ending one Speaker’s tenure and sending the party into disarray as it looks for another.

In an interview with TIME Monday, Paul said that the 40-member Freedom Caucus reflects frustrations among grassroots conservatives who feel little has changed since Republicans took control of both chambers of Congress. Spending is still high and President Obama has the upperhand, Paul argues, because GOP leaders in Congress won’t stand up to the White House.

“We took over the House. We took over the Senate. And nothing has changed. People see it as an abdication of leadership, and so they’re ready for new leadership,” Paul said. “The 40 Congressmen are, I think, reflective actually of the greater will of the party.”

Members of the Freedom Caucus effectively forced outgoing Speaker John Boehner from power and blocked his top lieutenant, Kevin McCarthy, from ascending to the top job in the House and second-in-line-to-the-presidency post. Facing a Freedom Caucus revolt, McCarthy abruptly took himself out of the running last week, leaving the House GOP struggling to find its next leader.

While many Republicans have had harsh words about the Freedom Caucus, Paul says they are a barometer of Republican opinion that the party should honor.

“People want to marginalize these 30 or 40 as crazy right-wing people, but they probably represent the true feeling of the grassroots as much as—or more than—those who have been there for a long time,” Paul said of his colleagues in Washington. “The longer that you are there, the less reflective of the people and more reflective of inertia.”

Read More: 13 Reasons the Government Could Shut Down Again This Fall

Paul sat down with TIME ahead of campaign rally on the campus of the University of Iowa and suggested that a possible government shutdown later this year might not hurt the GOP. The White House hopeful said that, despite the GOP being overwhelmingly blamed for the 2013 partial shutdown, the party went on a year later to win a majority in the Senate for the first time since 2006’s election.

“As much as I don’t advocate shutting down is a goal in and of itself, but when it did shut down, we won bigger than in the next election,” Paul said.

Indeed, Republicans did return to the majority after the 2014 elections after an eight-year run in the minority. Still, critics note that the Republican brand’s standing in polls plummeted after the shutdown.

Paul said colleagues should continue throwing up hurdles to government spending and use any tactic possible, including blocking a hike to the country’s credit limit known as the debt ceiling. That vote, scheduled in the coming weeks, does not spend new money, but instead allows the government to borrow money to pay its bills. Failing to do so would result in a government default and likely global economic crisis.

That dynamic, Paul said, is why Republicans are having a tough time finding a durable Speaker.

“The things the Speaker will ask them to do this fall are all things that we as conservatives object to: they’re going to raise the debt ceiling and they are going to pass a spending bill that doesn’t reform spending and actually allow spending to continue and debt formation to continue,” Paul said. “The 40 conservatives in the House will vote against raising the debt ceiling and they will vote against the continuing resolution. And I’m with them.”

Read More: Here’s What Could Happen Next in the Race for Speaker

In the Senate, Majority Leader Mitch McConnell has a similar challenge. Paul, however, has trickier politics here. Paul worked to win McConnell a tough re-election in 2014, and McConnell has publicly backed Paul’s simultaneous White House bid and effort to win re-election in the same year.

Reminded that McConnell controls the Senate, Paul tilted his head. “Yeah, I know. But he’s not willing to use that leverage of shutting down the government.”

So, should he go? “It’s not as simple as that,” Paul said as the interview ended and he prepared to address the students waiting for him on the college lawn.

Read More: How Rand Paul Has Already Changed the 2016 Race 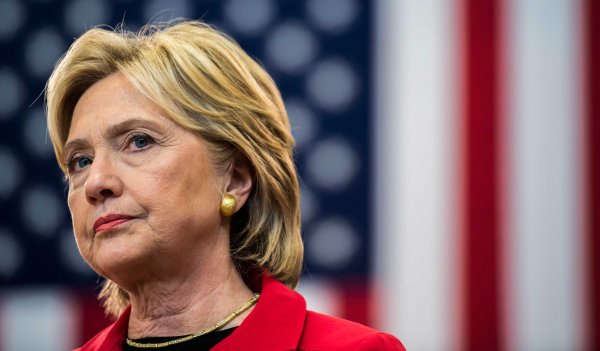 Hillary Clinton Takes On Fiorina
Next Up: Editor's Pick