Here's What Happens When You Drink Red Wine Every Night

Alcohol is the Goldilocks of the nutrition world. Too much can be destructive to your health, raising your blood pressure and your risk of developing several kinds of cancer. Too little may hold you back from some of the benefits that moderate drinkers enjoy, like lower incidence of cardiovascular disease, mortality and type-2 diabetes.

The amount that’s just right, according to a new study published in the Annals of Internal Medicine, might be a nightly glass of wine with dinner—for some people, anyway.

Researchers from Ben-Gurion University of the Negev in Israel wanted to look at how safe and effective it is for a specific group of people—those with well-controlled type-2 diabetes and who had a low risk for alcohol abuse—to drink moderately. People with type-2 diabetes are more likely than the general population to develop cardiovascular disease and have lower levels of heart-protective HDL cholesterol, the authors note.

They chose 224 people who fit this profile, and who didn’t drink wine currently, then assigned them to start drinking one of three things. At dinner, the people in the study were told to drink five ounces of one of the following beverages: mineral water, dry white wine or dry red wine. Under the guidance of dietitians, they also followed a Mediterranean diet without calorie restrictions—and kept it up for two years.

Intermittently, they took questionnaires and were subjected to follow-ups, including blood draws at the start of the study, six months in and at 24 months, so the scientists could look at biomarkers of glycemic control, lipids and liver function.

They found that the red wine drinkers had significantly increased their levels of good HDL cholesterol and had a more beneficial cholesterol ratio compared to the group that drank water. They were also the only group to experience a significant drop in components of metabolic syndrome. People who drank either red or white wine also reported better sleep quality than the group that drank water, and the researchers found no significant adverse effects with any group.

(It’s worth making it explicit that those who drank alcohol, drank just one glass per night, with meals.)

“This is what I’ve been telling people for years based on observational data,” says Dr. James O’Keefe, chief of preventive cardiology at Saint Luke’s Mid America Heart Institute in Kansas City, who was not involved in the study. “It seems to me that my patients who drink red wine in moderation tend to do better, and this really solid gold-standard kind of research confirms our intuitions about the beneficial effects of moderate alcohol intake.”

O’Keefe wasn’t surprised that the best results came from the group drinking red wine—which had resveratrol levels 13-fold higher than the white wine, according to the study. “Partly it’s the benefits of the alcohol, but red wine also contains a lot of unique antioxidants that are hard to get other places,” O’Keefe says. And pairing it with dinner, like they did in the study, is key.

“If you have a glass of red wine with your evening meal tonight, your peak blood sugar, if you measured it an hour later, would be about 30% lower than if you hadn’t had the wine,” O’Keefe says. The post-meal spike in sugar is one of Americans’ main sources of inflammation, which contributes to everything from diabetes to dementia to heart disease and arthritis, he adds. “It makes your system more able to sop up the sugar and the calories that you’re consuming in the meal if you have a little alcohol before,” he says.

But there’s a disclaimer, of course. Drinking every day can be a “slippery slope that a lot of people can’t safely navigate,” O’Keefe says. “If they start drinking daily and they drink a bottle or two a day, that’s a disaster.”

For those who can safely imbibe, one glass of dry red wine—like pinot noir or Cannonau—with the largest meal of the day is the very best pairing, O’Keefe says. “If you’re going to drink red wine, this study is a good reminder to do it the old fashioned way: drink it with a Mediterranean meal high in vegetables and fish and lower in meat, with fruit for dessert and using olive oil. Doing it in a social, relaxed setting also goes a long way to improving health and happiness.” 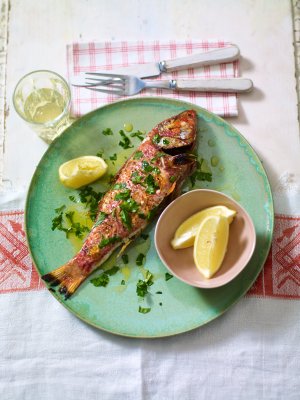 Why It May Unsustainable To Eat Some Healthy Things
Next Up: Editor's Pick