Why 'Redskins' Is a Bad Word

California’s ban of the use of the name “Redskins” by schools is likely the beginning of a trend. Native Americans have been decrying the term “Redskin” as a slur for a good while now, and Washington Redskins owner Dan Snyder’s refusal to change the name of the team is looking increasingly callous and antique. Many will celebrate that “Redskin” is likely starting to go the way of “Oriental” and—well, you know.

Yet some may quietly be harboring another question: What’s so terrible about referring to the fact that many Native Americans have a reddish skin tone compared to other people? It’s not as if having “red” skin is a negative or even humorous trait. It isn’t illogical to wonder, deep down, whether Native Americans are fashioning a controversy.

They aren’t, though, because words can come to have meanings quite different from their literal ones, and when it comes to matters of insult and dignity, meaning counts.

For example, the term “Oriental” for Asians became impolite 25 years ago. Yet it’s true that Asian heritage, for Chinese, Japanese and Korean people, is in “the Orient,” traditionally a Western word for Asia. One now and then hears someone, usually of a certain age, grousing that “Well, now they want to be called Asians” with an air of dismissal, as if people go around willfully creating confusion and feigning hurt.

But actually, “Oriental” came to be associated with stereotypes of the people in question, such that it was felt that a new term was necessary. Long ago, the same thing happened to “Chinaman.” What’s wrong with it calling a man from China a “Chinaman”? Nothing, in the literal sense—but as always, life is more than the literal. “Chinaman” signifies the subservient, exotified “Ah, sohhh!” figure from Charlie Chan movies; out it went and few miss it. “Oriental” was next.

These things can be subtle. I once had to inform a foreign student that in class discussion it was unseemly to refer to another person directly as “a Jew,” rather than as “a Jewish person.” To be American is to internalize that “a Jew” has an air of accusation and diminishment (ironically the student was from Israel!). That makes no literal sense, but it is a reality, as it is that to many, “blacks” sounds abrupt and hostile compared to “black people.”

We are faced with something analogous to what Steven Pinker has artfully called the “euphemism treadmill.” When something has negative associations, the word referring to it gradually takes on implied meanings connected with that contempt. This happens under the radar, but after about a generation, the reality becomes impossible to ignore.

What was once called “home relief” became more politely called “welfare” after a while, for example. But it’s easy to forget what a positive and even warm word “welfare” is, given the associations it had amassed by the 1970s. Today one increasingly speaks of “cash assistance‚” and that term will surely have the same bad odor about it among many sooner rather than later. Yet all of these terms mean the same thing literally. The literal is but one part of language as we actually live it.

“Crippled,” for example, is in itself a neutral, descriptive term—taken literally, it even harbors an element of sympathy. However, the realities of discrimination meant that “crippled” had a less neutral connotation after a while, upon which “handicapped” was a fine substitute. But after a while, we needed “disabled,” and of course now there is “differently abled,” and indeed there will likely be something else before long.

This, then, is why “Redskins” qualifies as slur despite not being a literal insult. Words have not only core meanings, but resonances of the kind that may not make it into the dictionary but are deeply felt by all of us. Sometimes we need to get back down to cases with a new word.

It may not be mean to tell someone their skin happens to be reddish. But it’s mean to call someone a Redskin. There’s a difference. 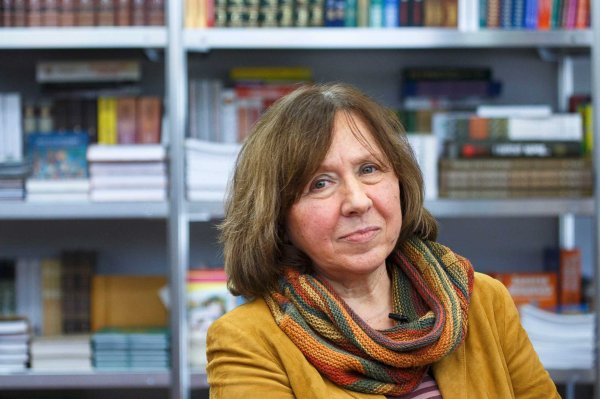 Today's Nobel Prize in Literature is a Win for Humanity
Next Up: Editor's Pick