Republican presidential candidate Ben Carson staunchly defended his assertion that the Holocaust could have been “greatly diminished” if Jews had been armed with guns in an appearance on CBS’s Face the Nation on Sunday.

“It’s not hyperbole at all,” Carson said. “Whether it’s on our doorstep or whether it’s 50 years away, it’s still a concern and it’s something that we must guard against. That’s one of the real purposes of having a constitution. I think the founders were really quite insightful into looking at possibilities and understanding what has happened in other places and trying to put together something that would prevent that from happening here.”

Carson’s doubling down came on the heels of a comment on Thursday in an interview with CNN’s Wolf Blitzer. “I think the likelihood of Hitler being able to accomplish his goals would have been greatly diminished if the people had been armed,” Carson said. “I’m telling you there is a reason these dictatorial people take guns first.”

Carson’s comments incited controversy and echos sentiments expressed in his just-published book, A Perfect Union, in which he cites Nazi gun control as a reason for the Holocaust.

“Through a combination of removing guns and disseminating deceitful propaganda, the Nazis were able to carry out their evil intentions with relatively little resistance,” Carson writes.

Critics argue that Carson’s placing blame on gun control immediately prior to the Holocaust as the cause of the event itself is misguided and inaccurate.

“It is mind-bending to suggest that personal firearms in the hands of the small number of Germany’s Jews (about 214,000 remaining in Germany in 1938) could have stopped the totalitarian onslaught of Nazi Germany when the armies of Poland, France, Belgium and numerous other countries were overwhelmed by the Third Reich,” Jonathan Greenblatt, national director of the Anti-Defamation League National Director, said in an opinion piece for the Huffington Post on Saturday.

Carson has come under fire over gun rights several times recently. He posted a Facebook message on Monday that provoked controversy in his defense of gun rights, saying he “never saw a body with bullet holes that was more devastating than taking the right to arm ourselves away.” He followed up the next day with an appearance on Fox & Friends, where he said he would have engaged with the gunman responsible for the Oregon’s Umpqua Community College shooting earlier this month.

“Not only would I probably not cooperate with him, I would not just stand there and let him shoot me,” Carson told Fox & Friends. “I would say: ‘Hey, guys, everybody attack him! He may shoot me but he can’t get us all.'” Carson emphasized that “guns don’t kill people” in that interview. 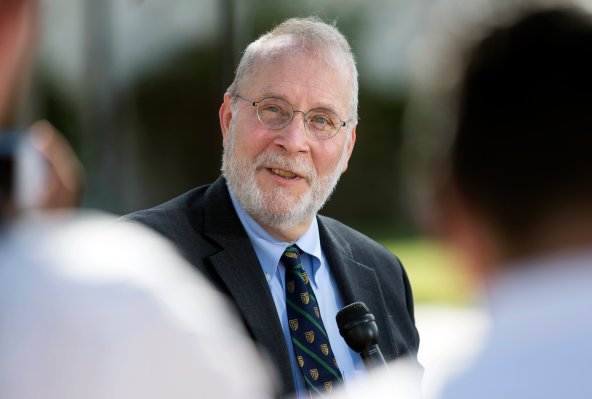 Lawyers: Army Officer Recommends No Jail for Bergdahl
Next Up: Editor's Pick