Martin O’Malley will finally have the moment he and his campaign have been waiting for on Tuesday, when he steps onto a debate stage in Las Vegas and takes on the two leading candidates for the Democratic nomination, Hillary Clinton and Bernie Sanders.

After months of hovering at around 1% in national polls despite frequent television appearances and grueling campaigning, the former Maryland governor’s goal is nothing less than a national introduction in front of the millions of viewers expected to tune in.

O’Malley’s focus in this first debate, hosted by CNN at the Wynne hotel in Las Vegas, will be broadcasting his own record as a two-term governor of Maryland and former Baltimore mayor, said advisors familiar with his preparation, though he will not shy away from pointing out inconsistencies in Clinton’s record.

Before O’Malley gets to Las Vegas, he will have prepped under intense lights to imitate the feel of TV lights and spent hours taking questions and facing off against advisors. O’Malley’s advisors rotate in playing different roles, sometimes with one person playing Hillary Clinton and a second playing the rest of the candidates.

In Las Vegas, O’Malley faces two main rivals, Clinton and Sanders, who have dominated the Democratic primary and overshadowed his own candidacy. The former governor has often struggled to break through between the establishment-backed frontrunner and the progressive insurgent.

But O’Malley supporters say they hope that their candidate will be the surprise star of the debate next week, stealing the spotlight from Clinton and Sanders with a performance they hope will be similar to Carly Fiorina’s breakout moments in the Republican debates, which vaulted her toward the front of the pack.

The key will be a forceful performance that presents him with the most comprehensive progressive platform in the primary, advisors said.

“The distinctions I have with the current front runners of our party is I have fifteen years of executive experience—actually getting things done as a big city mayor and a governor,” O’Malley said earlier this week at the Congressional Hispanic Caucus Institute when asked about the debate. “It’s one thing to have progressive values, it’s another to change those progressive values into progressive actions and accomplish results.”

So far, however, O’Malley has largely failed to gain any traction in the Democratic race. Despite setting up a leadership PAC long before announcing his candidacy and campaigning hard in the early states where his campaign has focused much of its resources and attention, he has struggled to top 4% even in Iowa, the first contest of the Democratic primary,

While his campaign has sought to downplay the importance of the first debate, it is a crucial moment in his candidacy that could determine whether he earns some traction on the national stage. O’Malley has been agitating for more debates and calling for more national airtime.

The former Maryland governor is known as an assiduous debate preparer, mastering long lists of fact sheets and minute policy differences. He has practiced a series of particular phrases during his months of campaigning in Iowa and New Hampshire this year, including “new Americans” and “new leadership.” Advisors say the self-proclaimed policy wonk has pored over the data in preparation.

Smith posted a photo on Instagram last week of O’Malley standing at a podium, wearing a tight-fitting, cornflower-blue t-shirt.

“He was very disciplined,” said former Maryland Gov. Bob Ehrlich, who faced O’Malley in debates in 2006 and 2010. “He knew what he wanted to say, and he was just going to say it. He went on some riffs, he knew his base and he always brought a lot more people to the debates than we did.”

But Tuesday will be the first time in years since O’Malley has been on a stage debating Democrats. During the 2006 race for governor—the last primary contest he ran—he never faced his Democratic opponent, Doug Duncan in a debate. Most of his debate experience is against Republicans, including on television in his role as chair of the Democratic Governor’s Association.

Craig Varoga, a former advisor to O’Malley who worked on his 2010 gubernatorial campaign said one important goal will be drawing a marked distinction with the other Democrats, whom he has plenty in common with.

“The challenge for him in this context is it’s been a very long time since he has been on stage with Democrats,” Varoga said. “I think for a challenger, which O’Malley is, you need a sharp issue distinction, rather than an issue distinction of degrees.”

O’Malley belonged to the Democratic Leadership Council, an alliance of centrist Democrats that helped propel Bill Clinton into the presidency. Hillary Clinton found much to like in his governorship: in an email dated April 2010 that Clinton sent as secretary of state to her friend Sen. Barbara Mikulski, she complimented O’Malley on his job as governor.

“How’s our friend, Martin, doing?” Clinton said in her email to Mikulski. “I know he has a rematch when he should be reelected by acclamation for steering the ship of state so well. Pls give him my best wishes.”

O’Malley has spent months criticizing Clinton for coming late to policy positions that the former Maryland governor says he has long voiced, including opposing the Trans-Pacific Partnership, the Keystone Pipeline and extensive Wall Street reform. On a couple of major Democratic issues, O’Malley sees a chance to paint Clinton’s record as inconsistent, according to sources, including on gun control and the Trans-Pacific Partnership.

Consistency—and getting there first—is a point of contrast he is eager to make with Clinton. And with Sanders, the surging Vermont Senator who has eclipsed all the other challengers for the Democratic nomination, O’Malley will seek to set himself up as an experienced leader and not simply an agitator.

It’s unclear how well O’Malley will be able to adept to unpredictable moments in the debate. In one memorable exchange during a 2010 debate with Ehrlich, O’Malley used the term “new Americans” to describe immigrants to the United States. Ehrlich retorted to laughs, “If someone breaks into my house is that a new member of my family that night?”

With so much riding on the debate, the O’Malley will rely on his preparation and his forcefulness. 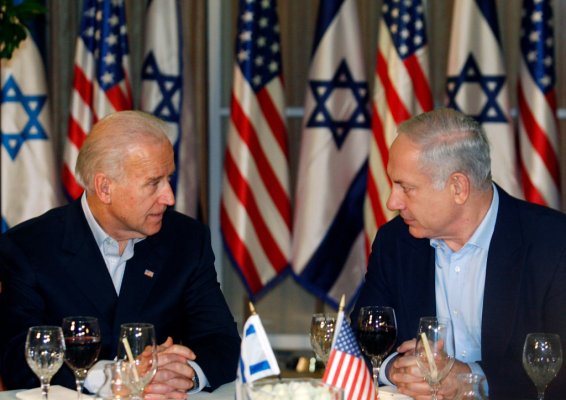 Biden Is Struggling to Stay Out of the Conflict Between Israel and Hamas
Next Up: Editor's Pick