Here's What Could Happen Next in the Race for Speaker

First of all, let’s be clear: House Republicans have no plan.

What they are doing right now is the political equivalent of chaos scientists staring at fuzz on television screens looking for meaning. In the wake of House Majority Leader Kevin McCarthy’s shocker decision not to run for Speaker minutes before the vote was due to take place on Thursday, House Republicans are scrambling to figure out where to go from here. Who will be their leader? Can anyone garner enough support from a party divided? The myriad of answers only raises more questions.

By the end of Thursday four potential paths emerged. I rank them here in the order of which I think is likeliest to the least likely option.

While this story is on process and politics, it should be noted that hanging in the balance here is a slate of must-pass legislation starting with the expired funding for the Ex-Im Bank, key transportation infrastructure funding that expires at the end of October, a debt ceiling raise that has to pass by early November and funding for the government that must pass by early December in order to avoid a shutdown.

“The assumption was that McCarthy would have the support of his caucus and that we would begin to negotiate the highway trust fund, the debt ceiling, government shutdown and the Ex-Im Bank,” said Rep. Steve Israel, a New York Democrat. “Those four assumptions were completely upended by the shocking events that happened in their caucus today and now the chaos continues.”

B. Speaker Boehner, redux. As I noted on Wednesday, Boehner may not be able to go as quietly into the night as he might like. He’s already got the job and has done it credibly for 4.5 years. And he seems to be the only guy everyone can (sort of) agree upon at the moment. Sure, he was facing a potential motion to vacate his chair, but if the conference fails to actually elect a new Speaker, he’s stuck with the job. “I think Boehner stays on as Speaker,” says Rep. Mario Diaz-Balart, a Florida Republican. “The big question isn’t who can get the majority of the conference, because that we can do—we could do it today. The big question is: Who can get 218 votes on the floor?” Indeed, McCarthy’s problem was never winning a majority of his conference—or 124 votes. The bigger problem is the vote on the House floor when all 218 votes—a majority of the 435-member body—must come from Republicans. McCarthy wasn’t going to get that given the Freedom Caucus’s opposition to his speakership. The Freedom Caucus is a loosely affiliated group of about 40 of the House’s most conservative members who on Wednesday endorsed McCarthy’s long-shot rival Rep. Daniel Webster of Florida. Boehner on Thursday said he will remain until a new Speaker is elected, whenever that may be.

C. Speaker Ryan. House Ways & Means Chair and 2012 VP nominee Paul Ryan is literally the only guy everyone can agree upon. He also adamantly doesn’t want the job. Less than 30 minutes after McCarthy abdicated, Ryan put out a statement: “While I am grateful for the encouragement I’ve received, I will not be a candidate. I continue to believe I can best serve the country and this conference as Chairman of the Ways and Means Committee.” Frankly, being Speaker right now is a thankless job—one likely detrimental to whatever long-term goals Ryan might harbor for, say, a Pennsylvania Avenue address. But pressure is building for him to take the job and late Thursday afternoon Politico reported that he was suspending all fundraisers for 48 hours.

D. Interim speaker. Many of the, let’s call them elders, of the party quickly coalesced around the idea of an interim Speaker—a caretaker to babysit the House through this difficult period until the next election. Some of the names floated: Oklahoma Rep. Tom Cole, Minnesota Rep. John Kline, Georgia Rep. Lynn Westmoreland, Oregon Rep. Greg Walden and Mitt Romney. Romney may not be a member of the House but a little known fact is Speakers don’t have to be elected members (an issue we explored to much amusement here). “I would consider it,” Walden told reporters in the Speaker’s Lobby Thursday afternoon. “I don’t know that it is the right decision. That’s what people are now just trying to absorb in the short term and trying to decide. Speaker for the rest of this Congress, or somebody long term?”

The reason I rank this idea relatively low on the pecking order is that it has already drawn the opposition of conservatives. When I spoke to him, Texas Republican Joe Barton rejected the idea outright, as did Rep. Bill Flores, chair of the powerful 170-member Republican Study Committee. “An interim [Speaker] will not give us an opportunity to give us that big, bold vision that we need,” Flores told reporters in a corridor off the House floor. “The leader that we find has to unite everybody from the [moderate] Tuesday group to the Freedom Caucus. There’s a way to do that and hold true to the principals to 99% of the spectrum of principles in the House.”

E. Compromise. This is a dirty word in the world of Republican politics. But the person Flores is describing above is hard to imagine. A big, bold leader who can pass compromises hammered out in the Senate with Democrats and still hold sway with the Freedom Caucus? Such a unicorn, outside of Paul Ryan, has not yet emerged from the conference. Another solution is electing a Speaker with Democratic votes—a pragmatist who could see through much of the pending legislation. It is a path both Boehner and McCarthy entertained and ultimately rejected because it would drag a conference careening right sharply to the left. But if no critical mass forms behind a conservative candidate—for all the power of the Freedom Caucus not one of them could draw the majority votes of the GOP conference for speaker—than others may emerge willing to make the Faustian bargain Boehner and McCarthy could not. As unlikely as this is, it is sadly the path that holds the best likelihood of avoiding a government shutdown in December. 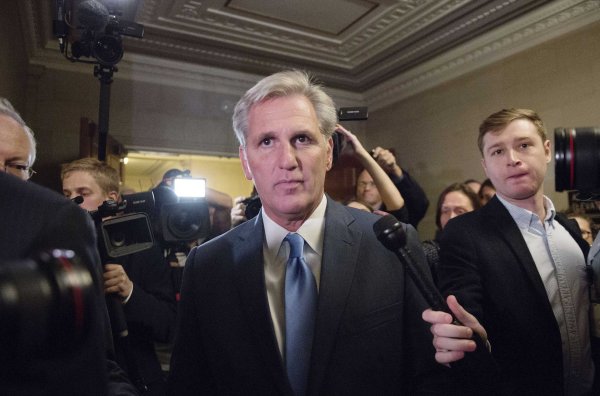 Kevin McCarthy Drops Out of Speaker’s Race
Next Up: Editor's Pick