Hillary Clinton made her latest break with the Obama administration Wednesday, when she announced her opposition to the Trans-Pacific Partnership free trade agreement. The agreement, one of the few instances of bipartisan cooperation of the president’s second term, has drawn fire from liberal groups who either oppose free trade, or wish it does more for labor. The problem for Clinton: TPP, as the agreement is known, goes further than both the South Korean free trade agreement Clinton helped renegotiate as Secretary of State, and NAFTA, the North American Free Trade Agreement, her husband signed into law and which she defended. Clinton was a staunch supporter of the agreement as Secretary of State, and spoke positively of it in her book, Hard Choices, which was released last year. Her opposition reflects the latest instance in which her campaign has been drawn leftward by the insurgent rise of Vermont Sen. Bernie Sanders, who has eaten up much of Democrats’ enthusiasm.

House Republicans are set to meet to elect their replacement for Speaker of the House John Boehner, but the once-orderly process has grown chaotic as conservatives in the “Freedom Caucus” unified behind a long-shot candidate who could deprive the GOP favorite of the 218 votes needed to win the Speakership before the full House.

Jeb Bush reports on his parents’ heath. Rand Paul auctions off his signed Clinton book. Keeping up with former candidate Scott Walker. And what Saturday Night Live’s Kate McKinnon though of Clinton’s performance.

How Saturday Night Live Makes Kate McKinnon Into Hillary Clinton
“The crazy eyes are apparently something that I just cannot help,” she tells TIME

Why the GOP Nomination Fight Will Be Messy
Rules changes, the massive field, and super PACs will likely make this the most intense contest in decades [TIME]

“I thought that she did a great job. It was the greatest day of my life, I’ll say that.” — Kate McKinnon on Hillary Clinton’s performance on Saturday Night Live

“No, I would provide the kind of leadership that says, ‘Get on the stick guys, and stop messing around, and cut where you need to cut, because we’re not raising any spending limits, period.” — Ben Carson flubbing an answer on whether he’d raise the debt limit on “Marketplace” on American Public Radio

How Scott Walker Has Been Spending His Days [ABC]

Who Will Qualify for the Next Republican Debate? [Wall Street Journal] 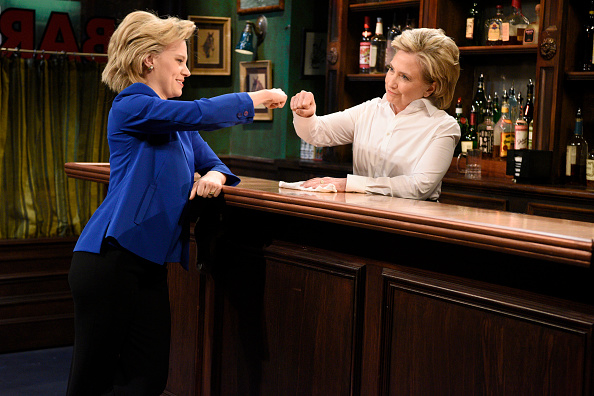 SNL's Kate McKinnon on That Hillary Clinton Impression
Next Up: Editor's Pick