Refugees celebrate after arriving on the beach in Lesbos, Greece. Thousands of migrants each day set out from nearby Turkey for the Greek island, riding in barely seaworthy rubber boats. Some don’t make it.
James Nachtwey for TIME
By James Nachtwey

Their journey began in war, poverty and oppression. They are fleeing, by the hundreds of thousands, from Syria, Iraq and Afghanistan, from Somalia, Iran, Pakistan and Eritrea, a ceaseless flow of humanity driven by fear, insecurity and lack of opportunity, their desperation matched only by their courage and by their hope. They make it to Turkey, within sight of the Greek island of Lesbos, and embark in a flotilla of frail rubber rafts to the refuge of Europe. Entire families–parents, the elderly, young children and infants–brave the perilous crossing outfitted with flimsy “life preservers” or inflated inner tubes. Once they set foot ashore, their past lives are no more than a memory, their futures uncertain. They only seem to follow those who have gone before.

They begin the next leg of the journey across Europe, by boat, by train, by bus and on foot, from border to border, with a vague notion of reaching Germany or Sweden or Norway. In the Croatian town of Tovarnik, on the border with Serbia, thousands huddle at a train station and thousands more along a roadside, waiting to board trains or buses for unknown destinations. Many have no idea which country they are in. The scene is barely controlled by riot police more familiar with soccer hooligans than distressed asylum seekers. Families are separated in anguish, but the police remain oblivious to their pleas, betraying the hope of the desperate who have made it so far, against all odds. Far from being finished, their journey to safety has only begun. 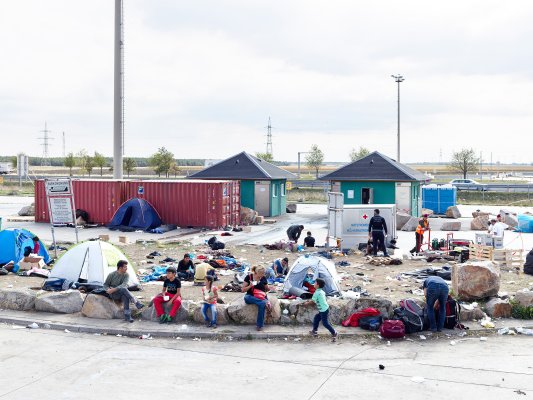 The Great Migration of 2015
Next Up: Editor's Pick