How Smugglers Are Profiting From the Migrant Crisis

By Simon Shuster and Francesca Trianni

Nothing quite captures the scale of this summer’s migration crisis in Europe like the fields of deflated boats and life jackets scattered along the eastern islands of Greece. The beaches where tourists would normally sunbathe are practically coated with these items, sometimes stacked in mounds that could fill an Olympic swimming pool. Stare at them long enough and it’s hard to avoid an unsettling thought: someone is making a fortune on selling these things.

All along the western coast of Turkey, where most of the refugees from Syria set out, the migration crisis has brought windfalls for many forms of commerce that profit from migration. Life jackets can now be found hanging for sale outside of cigarette kiosks, clothing stores and at least one barbershop in the Turkish city of Bodrum. The owners of an enterprising hardware and furniture store in that city even put out a display of rubber boats in their parking lot early this summer, making sure potential buyers can see them from the adjacent highway.

“These are very, very popular items,” says Yasar Ozdemir, the market’s deputy floor manager. Every other day this summer, he says, some Arabic-speaking customers come and buy a boat for around $3,000, as well as a set of 10 to 15 life vests in various sizes, even ones for children. “Of course we all know what they’re doing with these boats,” he adds.

They are using them to make the crossing to the Greek islands, a stopover on their way to claim asylum in Western Europe. Typically this is the most dangerous part of their journey, and hundreds of migrants have drowned this year in the waters between Greece and Turkey, usually after their rubber dinghies deflate or flip over the water.

So Engin Olcay, the owner of Bodrum’s largest fishing and boating emporium, the Marina Plaza, sees his business as a kind of public service. “We offer quality here,” he says one afternoon in early September, holding up a life vest that retails for $120. “We save lives.”

He wouldn’t say exactly how much he has earned this year from the sale of such commodities. But the trade has become one of the more lucrative aspects of mass migration for businessmen along the Turkish coast. Most of the profit still goes to the smugglers in this region who charge upwards of $1000 per person to arrange the crossing by boat to Greece. But the boats themselves have become a lasting symbol of the refugee crisis – and a blessing to many of the entrepreneurs who turn a profit on mass migration.

For more: Meet the Smugglers Bringing Migrants to Greece 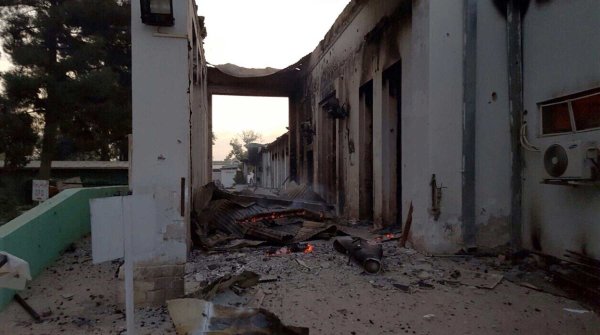 Wikileaks Will Pay $50,000 for Kunduz Bombing Footage
Next Up: Editor's Pick