Doctors Without Borders Releases Post-Bombing Footage and Calls for Investigation

Footage released by Doctors Without Borders Wednesday shows the organization’s facility in Kunduz, Afghanistan, in shambles after a U.S. military airstrike. The organization released the video as its leaders called on a United Nations investigatory body to lead a fact-finding mission on the bombing, which killed 22 people.

“Today we say: enough. Even war has rules,” said Jason Cone, U.S. executive director of Doctors Without Borders, at a press conference. “This was just not just an attack on our hospital—it was an attack on the Geneva Conventions.”

The video released by Doctors Without Borders, known internationally by its French acronym MSF, shows the group’s hospital as a fully functional facility before Saturday’s bombing and a rubble-filled shell following the bombing. At Wednesday’s press conference, Cone described a grisly scene as staff continued to care for patients even as they were under attack.

“In Kunduz, our patients burned in their beds. Our doctors, nurses and other staff were killed as they worked,” he said. “Our colleagues had to operate on each other.”

Since the strike this past weekend, U.S. military officials have admitted the bombing was a mistake and apologized. But explanations for how and why the strike was authorized have evolved. Cone said his organization’s request, which calls on the International Humanitarian Fact-Finding Commission to investigate, was aimed at uncovering unbiased information in the face of changing explanations. The commission requires the authorization of one of 76 signatory states to investigate.

Cone stressed that hospitals have a protected status under international humanitarian law and suggested that Saturday’s attack flouted those laws. Asked whether the facility may have been treating enemy combatants, Cone dismissed the question as irrelevant.

“We treat anyone who is a victim of conflict,” he said. “That’s what we do. That’s our reason to exist.” 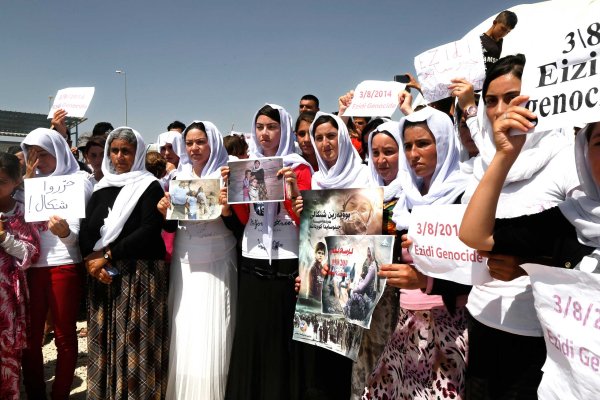 Yezidi Woman Describes Being Captured by ISIS
Next Up: Editor's Pick