Meet the Black Mambas, the Scourge of South African Poachers

The moon had just cleared the horizon over South Africa’s Balule Nature Reserve one night in late September when 22-year-old Leitah Mkhabele heard the sound of poachers crashing through the underbrush. They must have clipped a hole in the fence, thought Mkhabele, as she and her patrolling partner, 24-year-old Nkateko Mzimba, crept closer. Poachers had slaughtered one of the reserve’s rhinos the month before, and the two women weren’t about to let it happen again. Mzimba radioed back to base for backup. The noise alerted the three men, who turned in their direction. Mkhabele raised her weapon, then paused. In the dark, she couldn’t tell what was slung over the first man’s shoulder. Was it a gun, or a coil of wire to set a snare? She did a quick calculation. If it was a gun, she would be shot before the poacher got within range of her pepper spray. So she ran.

The poachers fled before backup arrived. Mkhabele and Mzimba were frustrated that the trespassers had gotten away, but to their bosses, they did exactly what they were supposed to: they proved that the Black Mambas, a nearly all-women anti-poaching unit created to protect the reserve’s rhinos, could keep poachers out of the park. Still, says Mkhabele, “It would have felt good to shoot the guys who keep trying to kill our rhinos.”

Of all the anti-poaching tools in a game warden’s box, the Black Mambas are perhaps the most innovative attempt to stem an epidemic that threatens to see the demise of wild rhinos within a generation. By deploying women as scouts instead of men with guns, Balule warden and Black Mambas founder Craig Spencer has changed the rules in a war between commercial poachers and wildlife protectors.

Rising incomes in Vietnam and China are driving demand for rhinoceros horn, which, despite scientific research to the contrary, is believed to cure ailments from hangovers to cancer. With a street value of more than $65,000 a kilogram in Asia, the illegal trade in rhino horn has attracted international criminal syndicates wielding a sophisticated arsenal of helicopters, advanced weaponry and a smuggling infrastructure that rivals cocaine cartels. Of the estimated 28,000 rhinos left in the wild, approximately 90% are in South Africa. But the country is struggling to keep them safe. At least 1,215 rhinos were killed by poachers in South Africa last year, up from 13 in 2007. At this rate, South Africa will see more rhinos killed for their horns than born within the next few years. Mkhabele worries that by the time her two-year-old son grows up, the only rhinoceroses he will be able to see will be on TV. Rhinos, she says, “deserve to survive.They shouldn’t be killed for something that is not true.”

In order to stem the carnage, South African conservationists and law enforcement bodies have deployed heavily armed guards, surveillance planes, drones, canine units, tracking devices and even horn-mounted spy cameras. Private game reserve operators have shaved down their rhinoceroses’ horns to make them less attractive targets. (Like fingernails and horses hooves, rhino horn can be removed in a painless process). Still the poachers come — the 250 grams of horn embedded in a rhino’s skull makes the risk worthwhile. Some rhino proponents are embracing the most radical solution of all: legalizing trade in horns to drive poachers out of the business. One game farm owner is suing the South African government for the right to sell horns banned under the Convention on International Trade in Endangered Species (CITES) to cover the rising costs of protecting his herd.

Armed only with walkie-talkies, hand cuffs and pepper spray, the Black Mambas may be the most low-tech solution of all. The 23 female and three male Black Mambas serve as a visible deterrent to poachers as they patrol for broken fences, snares, poacher camps and distressed animals. They take their name from the Black Mamba snake, the lethal scourge of the African bush, says Mzimba: “We are strong, and fast like snakes, so they call us the Black Mambas.”

Mkhabele would like to have a gun for self-protection, but Spencer argues that arming the Mambas would make them even more vulnerable to attack. “The role they play is purely observation. If they had weapons the poachers would up their game,” says Spencer. “Imagine if they pulled off a shot against those guys that night. They would have been hopelessly slaughtered.” He may have a point: despite several run-ins with poachers, none of the Mambas have been seriously wounded. Not only are they challenging poachers, they are taking on stereotypes, says Mzimba. “They say women can’t work in the bush. So I am very proud of us here, because we are working in the bush. Without guns, as women. It means we are strong.”

Their most important role, however, isn’t in the reserve, but in teaching the value of wildlife to residents of the impoverished townships surrounding Balule and Kruger National Park where most poachers originate. Many locals see wildlife sanctuaries as the preserve of white and wealthy tourists. They resent the fact that they cannot graze their cattle in the reserves, or hunt game freely like their forebearers did. The Black Mambas, who were recruited from the same neighborhoods, are tasked with countering that perception. Spencer chose to hire women because he thought they would be better at bringing the conservation message home. They have embraced the responsibility. Belinda Mzimba, who joined the Mambas 18 months ago with her cousin, Nkateko Mzimba, makes a point of visiting local schools whenever she is on leave to tell students about South Africa’s “Big Five”—the lions, elephants, rhinos, buffalos and leopards without which no safari adventure is complete. “I tell them ‘when you grow up you don’t need to go to poaching, because the big five animals will earn the money.’” Jobs come from tourism, she explains, and without the big five, the tourists won’t come. “You can’t be a tour guide, a field guide, if there is no nature left.”

Spencer says the Mambas have played a significant role in reducing snare traps and keeping poachers from setting up camp in the privately-run reserve. But it is not certain that their successes can be tailored to fit other areas. Rhinos may be safe in Balule’s 154 square miles, but once they cross the open border into Kruger, with its 7,523 square miles of unfenced savannah, they are much more vulnerable. To replicate the Mamba’s successes across an area roughly the size of Israel would require thousands of recruits. As it is, Spencer spends about $20,000 a month on security for Balule, and he’s still lost five rhinos in the past two years.

Rhino conservation projects working with high-tech solutions are coming up against similar barriers. The anti-poaching organization Protect has developed a device that combines heart-rate monitors, GPS tracking devices and tiny video cameras that can be embedded in a rhino’s horn to provide real time surveillance. If a rhino’s heartbeat spikes, or goes flat, rangers know where to send a team. “All these anti-poaching units do a phenomenal job,” says Protect Director Steve Piper. “The trouble is that they have to patrol vast areas. They could be the SAS or the Marines or the Delta Force, but if they don’t know where the action is, what can they do about it?” But in order to be effective, every adult rhino would have to wear a device, says Piper. Otherwise poachers would simply go after the ones without. Even if costs come down low enough to make that possible (working prototypes run in the thousands of dollars), the necessary monitoring infrastructure is likely to be beyond most nations’ capacity.

When CITES convenes in Johannesburg next year, South Africa is expected to endorse a one-off lifting of the 38-year-old ban against trade in rhino horns so that it can sell a government stockpile of 21 tons, worth more than $1.36 billion, to invest in rhino protection. Rhino breeders want to take it a step further, legalizing international trade so they can farm rhinos for the horns, like sheep for their wool. They argue that by regulating trade in rhino horn, they can meet Asia’s demand, undercut the poaching syndicates, and cover the costs of rhino security.

For some conservationists, it’s a persuasive argument, simply because nothing else seems to be working. But if desperation leads to the industrial farming of a wild animal, how much, really, has been achieved, asks ecologist Jason Gilchrist at Edinburgh’s Napier University. “Why bother saving the rhino if it isn’t wild anymore?”

According to Mkhabele, the solution has to start with the men who earn a pittance risking their lives to deliver horns to the smuggling syndicates. Every time she questions a poacher, he says he does it because he doesn’t have a job. “They won’t stop unless they run out. After rhinos, they will go for the elephants. After the elephants they will go for other things,” says Mkhabele. In Asia, there is a big market for lion bone. Rumors are swirling in her community that giraffe parts can cure AIDS. “There will always be a reason to poach, until we make people understand that without our animals, South Africa is nothing.” That’s where the Black Mambas come in. They may not be able to stop poachers with pepper spray. But they can stop them with education. 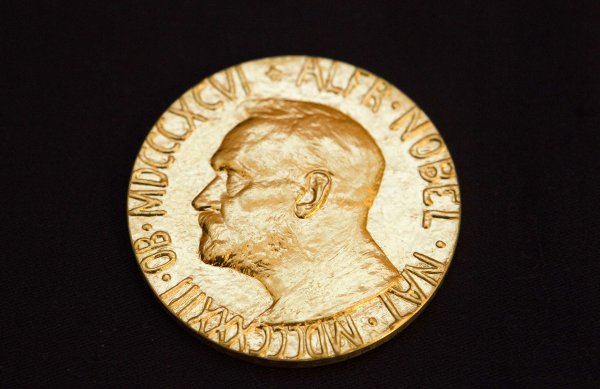 Can You Guess the Nobel Prize Winner?
Next Up: Editor's Pick