However, the most-buzzed about product at the launch was the laptop/tablet hybrid Surface Book, which the company is calling the “ultimate” laptop. The Surface Book, Microsoft’s first in-house laptop, starts at $1499 for its entry level model equipped with a Intel Core i5 processor and 128GB, and goes up to $2,699 for a model with 512GB and a Core i7 processor. Unlike previous devices, the Surface Book is a laptop first, and a tablet second: The laptop’s screen detaches from the keyboard to become a standalone tablet.

In a small area connected to the event, I was able to try out Microsoft’s latest tablets, which included putting its new trackpads and keyboards through its paces and short conversations with Microsoft’s digital assistant Cortana.

The first thing you need to know about the Microsoft Surface Book is that it’s light. Microsoft put a lot of effort into making both the keyboard and screen components skinny and durable, and for the most part they’ve succeeded. In fact, when the Surface Book’s 13.5-inch screen is detached and separated from its keyboard, it makes the smaller Surface Pro 4 feel thick and heavy.

The Microsoft Surface Book is a formidable laptop. According to Microsoft, it has a standalone Nvidia graphics processor installed in its keyboard, which means it can run professional-level apps like AutoCAD and Adobe Photoshop. Several other high-end Windows laptops have included discrete graphics cards before, but it’s impressive that Microsoft was able to cram an Nvidia GPU into a tablet. However, when you convert the Surface Book into a tablet, it won’t be able to use its Nvidia GPU, reverting to the graphics processor included with its Intel processor.

Converting the Surface Book from a laptop into a tablet is easy. On the device’s keyboard, there’s a button on the upper right-hand side of the keyboard, which was once used to eject CDs. Now that space features a new button that when pressed lets you detach the Surface Book tablet from its keyboard. There’s a satisfying vibration when the keyboard is removed.

The keyboard and trackpad attached to the Surface Book are both fantastic. The trackpad is certainly comparable to those found on MacBooks. The keyboard is fully-sized, but has chiclet-style keys that offer a significant amount of resistance when pushing down. However, in my brief time using it I don’t expect its physical interface to be a deal breaker for anyone, and I can see the keyboard gaining fans of its own.

Meanwhile the Surface Pro 4 received an upgrade all its own, but you should think of it as an “S-year” upgrade. There isn’t a whole lot that’s new with the Surface Pro 4, but on the whole it’s more refined. The laptop’s size remains the same as last year’s model at 12-inches, but Microsoft has shrunk its bezels to pack in a little bit more into the screen. According to Microsoft, it’s added a new chipset to make its touch interface smoother and more effective. Like most upgrades, it’s slightly faster and skinnier than its predecessor.

The Surface Pro 4 starts at a more affordable $899, gets a better keyboard cover and significantly larger trackpad, which addresses one of the biggest issues with its predecessor.

Ultimately, one of the most interesting aspects of Microsoft’s new devices is a newfound Apple-like attention to detail.

For example, both the Surface Pro 4 and the Surface Book have a new way to attach Microsoft’s stylus pen to the tablets: magnets. There are strong magnets in both the pen and the Surface Book and Surface Pro. It’s a lot better than the fabric loop Microsoft used in the past, and it’s a whole lot better than a holster, like the one found on Samsung’s Galaxy Note phones. The Microsoft pen comes with an “eraser” that can be used to remove notes on the back of the stylus without diving into the device’s settings menu.

The Surface line of tablet hybrids has been both a strength and weakness for Microsoft since it first launched in 2011. It’s a strong enough product that now both Google and Apple are offering similar big, powerful tablets with detachable keyboards. It’s also been a drain on Microsoft in the past, which had to write down millions on unsold Surface tablets, and has poured even more money into large advertising campaigns. 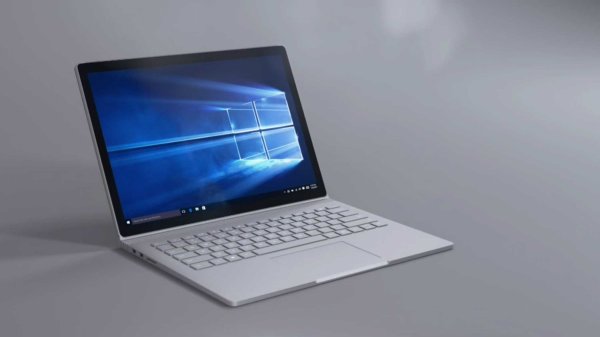 See Everything Microsoft Released in 2 Minutes
Next Up: Editor's Pick