Officials carry an injured woman off the speed boat of Maldives President Abdulla Yameen (not pictured) after an explosion on board, in Male, Maldives, on Sept. 28, 2015
Reuters
By Rishi Iyengar

Two aides of Maldives President Abdulla Yameen were arrested on Tuesday in connection with an explosion on his boat last month, with authorities now saying it was an attempted assassination rather than a mechanical failure as initially thought.

Both suspects had access to the boat “in the line of their duty,” Shareef said, but did not mention their specific alleged role in the bombing.

The President escaped unscathed from the blast, which took place just over a week ago as he was returning to the island nation’s capital city, Male, from the hajj pilgrimage in Mecca. His wife suffered minor injuries, however, while a bodyguard and another aide were hospitalized.

Yameen, whose tenure since he came to power in 2013 has been controversial thanks to a greater crackdown on dissent and the imprisonment of his predecessor Mohamed Nasheed, has previously been threatened by militants linked to the Islamic State of Iraq and Greater Syria (ISIS). 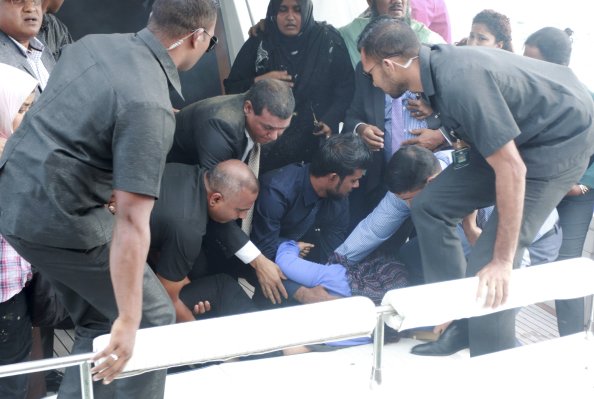