An Amnesty International activist holds a picture of Saudi blogger Raif Badawi during a protest against his flogging punishment on Jan. 29, 2015, in front of Saudi Arabia's embassy in Berlin
Tobias Schwarz—AFP/Getty Images
By Rishi Iyengar

Raif Badawi, the blogger from Saudi Arabia sentenced to 1,000 lashes for his liberal writings, was named the 2015 International Writer of Courage and the joint winner of the PEN Pinter Prize on Tuesday.

British poet and literary critic James Fenton was named the winner of the PEN Pinter Prize in June. He then chose Badawi to be his co-recipient from a shortlist of “international cases of concern” supported by the English chapter of PEN, a global organization of writers.

“What moved me was the contrast between the simplicity of Badawi’s liberal aims — their modesty, almost — and the ferocity of the punishments they have brought down on him,” said Fenton, hailing the Saudi writer’s courage and conviction.

Badawi was fined more than $250,000 and sentenced to 10 years in prison in May last year for setting up a blog called the Saudi Arabian Free Liberals Forum, which advocated free speech until it was shut down following his arrest in 2012. The charges against him include “violating Islamic values and propagating liberal thought.”

Wikipedia co-founder Jimmy Wales, who has actively campaigned for Badawi’s release and accepted the award on behalf of his family, criticized the British government for its lackluster condemning of the Saudi government.

“Saudi Arabia is the U.K.’s biggest trading partner in the region,” Wales said, according to the Guardian. “It is time for the government to show moral leadership, to demonstrate that its support for human rights is more than rhetoric and to use the very considerable influence it has on the regime and win the freedom of Raif Badawi and all other political prisoners of conscience.”

The Pinter Prize was instituted in 2009 in memory of British playwright and Nobel Prize winner Harold Pinter, and is awarded annually to a U.K. writer who demonstrates a “fierce intellectual determination … to define the real truth of our lives and our societies.” 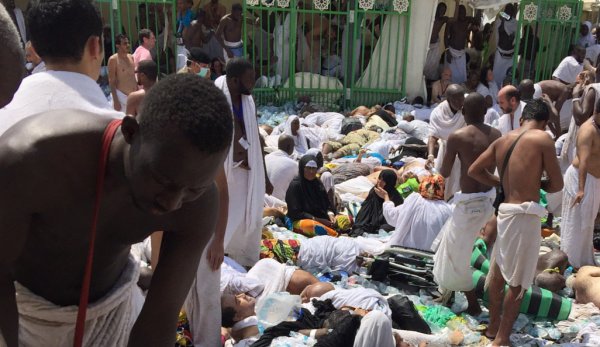