The New York Times reports the attorney general’s office has asked for data from DraftKings and FanDuel, two of the most popular fantasy betting websites, to learn what rules and regulations each company has in place to stop fraud.

The investigation comes after an employee with access to proprietary data at DraftKings won $350,000 playing on rival website FanDuel. Unlike fantasy football leagues where players set up teams for an entire year, daily fantasy football sites allow competitors to pay an entry fee in the morning, choose players competing that day to build their team, and receive their monetary reward at the end of the day based on how that team did with the potential to win million of dollars.

MORE: How the Sports Industry Is Fueling the Daily Fantasy Scandal

A number sports and sports broadcasting companies—from NFL team owners to Fox, which broadcasts the NFL and MLB—have either direct stakes in fantasy websites or promotional agreements with them. Since the DraftKings employee’s winning shook the sports world, FanDuel and DraftKings have temporarily prohibited their employees from playing fantasy sports on other sites. ESPN announced Tuesday following the scandal that it will cut elements of its broadcast sponsored by DraftKings out of its shows, but not the commercials it airs between broadcasts, according to the Associated Press.

Attorney General Eric T. Schneiderman requested the names, titles and job descriptions of any employees who deal with the sort of data that could give a competitor an advantage on these sites.

“It’s something we’re taking a look at — fraud is fraud,” Schneiderman said in a radio interview early Tuesday, according to the New York Times. “And, consumers of any product, whether you want to buy a car, participate in fantasy football, our laws are very strong in New York and other states that you can’t commit fraud.”

Daily fantasy games have also come under fire recently for their similarities to gambling. Current law states that fantasy betting is not legally considered gambling because it is a game of skill, not luck (TIME’s Sean Gregory explains that controversy here.) But politicians in individual states as well as D.C. are calling for a re-examination of those rules in light of the current scandal. 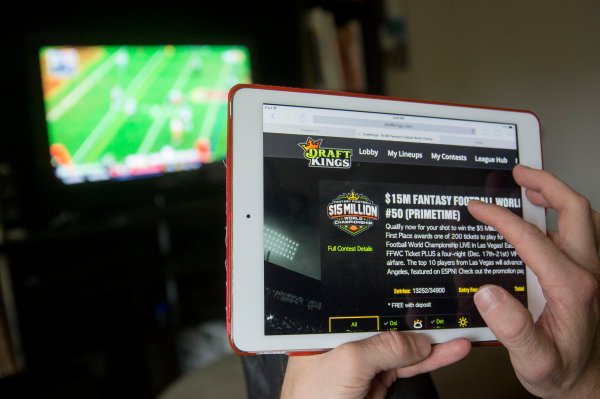 How the Sports Industry Is Fueling the Daily Fantasy Scandal
Next Up: Editor's Pick