Italian navy rescues asylum seekers traveling by boat off the coast of Africa on the Mediterranean, June 7, 2014.
Massimo Sestini—Polaris
By Lucia De Stefani

We’ve all seen the images of thousands of refugees and migrants on overcrowded ships, fleeing oppression, war and poverty in North Africa and the Middle East for a chance in Europe. Italian photographer Massimo Sestini shot one of these images last year – it captured people’s imagination and went on to win a World Press Photo award and was selected in TIME’s Top 10 Photos of 2014.

Now, the Italian photographer wants to find out what happened to the migrants and refugees in his picture, and he’s launched a campaign, appealing for answers.“There were 500 people on that boat, so I would like to launch a worldwide campaign to ask them all ‘Where are you?’ so that I may continue my photo reportage on migration, and further help [shed light] this dramatic issue,” he says.

Everything started last June, when a World Press Photo exhibition organizer called Sestini from Switzerland with news that a group migrants, now living in the country, were lingering in front of his iconic photograph. Eventually, they asked the organizers if they could have a copy of the image as they recognized themselves and others on board.

“I said [to the organizer] I could give them the photo for free, but you need to find me their emails, their contact [information],” says Sestini.

Although the photographer was unable to get the migrants’ contact details, that episode was a catalyst for the Where Are You? campaign. Sestini has since launched a website, encouraging people to contact him if they recognize anyone on the boat. The photographer hopes to find at least 10 of those people and tell their stories of integration.

“This would allow [me] to show the migrants in their normal lives, families from Syria able to find an arrangement. They are doctors, engineers who in order to escape war and death in their own country have risked their own life, but they might end up becoming respected professionals in some other parts of the world,” he says. “Maybe there is a happy family living now in [Geneva],” working as gardeners in a public park, he adds. “It would be nice to place the two photographs side by side: the photograph of them on the rescue ship, and the photograph of them in that garden in [Geneva].”

Massimo Sestini is an Italian photographer based in Florence, Italy. His photograph of a boat with refugees crossing the Mediterranean Sea won him the 2015 World Press Photo award for General News, second prize singles. 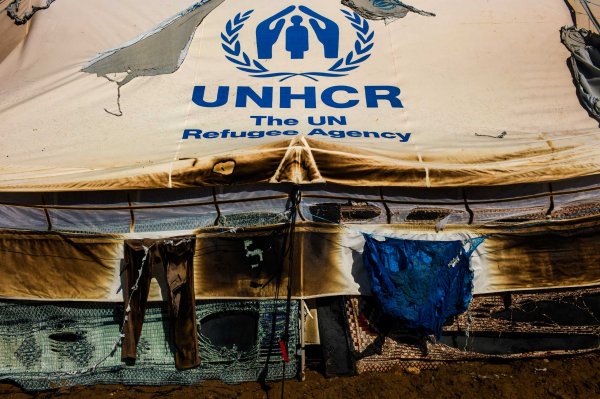 Photographing Europe's Refugee Crisis for the United Nations
Next Up: Editor's Pick