How the Flooding in South Carolina Could Hurt Joe Biden

Joe Biden’s path to the White House runs through South Carolina, a state now buried under deadly floodwaters and with few signs its waterlogged Low Country or capital will quickly dry.

How the Obama Administration responds to the disaster could affect the Vice President’s potential campaign for the Democratic presidential nomination. A botched response could turn Palmetto State voters against him, while a successful response could engender goodwill, even though in neither case would he really be responsible.

Natural disasters have long presented both a risk and an opportunity for political leaders. In recent years, President George W. Bush suffered for a poor response to Hurricane Katrina, while New Jersey Gov. Chris Christie won both praise and criticism for his handling of superstorm Sandy.

For now, things appear to be going smoothly, with South Carolina Gov. Nikki Haley, a Republican, and President Obama working together.

But the stakes are high for Biden because it is the one place where his advisers see a chance to derail his chief rival, former Secretary of State Hillary Clinton. Biden has not done well in the past in Iowa’s leadoff caucuses, while Vermont Sen. Bernie Sanders is a regional favorite in the New Hampshire primary.

When Biden’s advisers and outside allies talk about how he might catch momentum, they always start with South Carolina. It’s a state Biden knows well from both personal and political travel.

When Beau Biden, the Vice President’s 46-year-old son, lost his battle with brain cancer this year, the Biden clan retreated to South Carolina. It is a familiar destination to them, and the Bidens used the time to consider their next moves. Chief among them: What does “Pop,” as the Vice President is called, do next?

Beau very much wanted Joe Biden to make a third bid for the presidency, a job he has coveted since his first attempt in 1988. The patriarch was less convinced, refusing to promise Beau that he would do it. But the Vice President also asked his advisers to figure out of it even were possible. (There are also reports that the Vice President himself leaked that consideration to a New York Times columnist in order to build buzz for a potential bid.)

Thus began a summer of hushed phone calls, circumspect conversations about whether local elected officials had any interest in a Biden 2016 bid, unusual requests for a couple minutes of major donors’ time. Word quickly got out that Biden’s team was making the rounds, and the Vice President did little to quiet the chatter.

Indeed, the more Biden heard, the more he liked it. He asked aides for more information, advisers to weigh other scenarios. He wanted to keep updated on Clinton’s summer woes, when seemingly endless stories kept coming about her use of a private email server. Clinton’s poll numbers dipped. Biden’s popularity rose.

Biden’s spirits did not. He remains a grief-stricken father whose public emotions are one of the reasons he has become a beloved grandfather in Democratic circles. Should be attempt to deny Clinton the title of first female President, his sheen would quickly lose its luster as Clinton’s allies start scouring his record.

So much of politics comes beyond the control of the candidates. If Beau Biden’s death was one bookend of the improbably Biden 2016 campaign, the flooding in South Carolina might be the other.

South Carolina seems to have caught a lucky break for now. Of the 30,000 people who lost power in South Carolina, fewer than 1,000 were still in the dark on Tuesday. The rain in has, for the moment, stopped.

Read More: Beau Biden’s Dying Wish Was for His Dad to Run for President, Report Says

Yet 18 dams have now been breached, and residents of Columbia, the state’s capital, and Charleston, its jewel, are still using canoes to navigate their neighborhoods. Residents are preparing for extended stays in emergency shelters, and those whose houses were spared now lack safe drinking water. The broad swath of the state is waiting for the rains to return to the ocean. That could take weeks.

All that comes as Biden faces pressure to make a decision. The Democrats’ first debate is next Tuesday, and a Biden absence would be conspicuous.

On the other hand, one former Biden adviser suggested the timing could be advantageous. Biden is a shrew operator, and he could wind up doing disaster relief events while Clinton squabbles with Sanders on the debate stage in Las Vegas.

It would allow him to appear presidential. And it would keep his two main opponents from landing any blows against him and his out-of-practice debating skills. Maybe, in some strange way, the flooding in South Carolina could buy Biden a little more time to jump in the race. 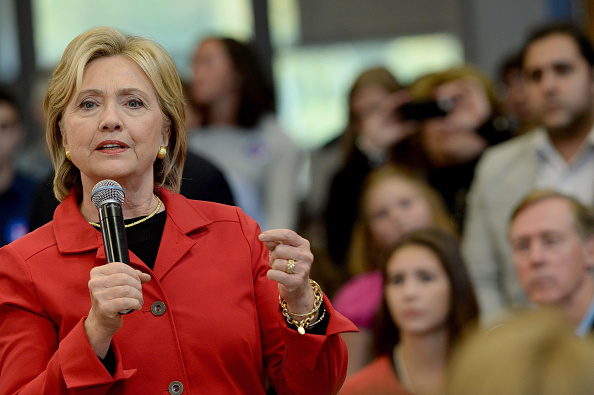