How Drunk History Gets Made By Taking the Past Seriously

By Lily Rothman and Julia Lull

Derek Waters isn’t a founding father, but he’s played plenty of them on TV. On a recent afternoon, Waters was channeling George Washington—one of the many roles he’s taken on for Drunk History, the Comedy Central show he created with Jeremy Konner. Sitting down with TIME at New York City’s Fraunces Tavern, the city landmark most famous as the site of Washington’s farewell to his officers in 1783, Waters joked that he could still feel the first President’s spirit in the air.

“I think G. Dubs hung out with some cool people here. I can feel them,” he said.

And what were they saying to him?

Sure enough, Waters managed not to disturb any the items in the tavern’s Long Room, where Washington once stood. (The room is actually a re-creation but many of the items in it, down to the floorboards, date from the Colonial period.) But that doesn’t mean he’s above disturbing history—after all, that’s pretty much why Drunk History exists. The show, which is currently in its third season, was originally a web series with a simple conceit: get funny people drunk, have them tell a story from history and ask famous actors in full period garb to lip-sync the story. It’s led to great moments in casting like Kristen Wiig as Patty Hearst, Tony Hale as Meriwether Lewis, Nick Kroll as Ronald Reagan, Octavia Spencer as Harriet Tubman and Will Ferrell as Roald Dahl. But just because the show skewers the past doesn’t mean it takes history lightly, says Waters.

In fact, a huge amount of research goes into producing those drunken antics: a team of history PhD students at UCLA worked with the Drunk History team for a couple of months prior to this season, creating a list of nearly 200 stories that hew to Waters’ instructions to make viewers wonder why they never learned them in school. The challenge is finding humor in the often dark corridors of America’s past. “War and people dying over things that don’t matter” are out Waters says, because “that’s never going to be funny.”

For the actual show, 39 of those stories made the cut to be paired with potential narrators. Each segment, which ends up edited down to under 10 minutes, takes a full day’s (or night’s) worth of filming. And, though Waters says he gives the narrators plenty of room to wander, he knows the story in advance so he can steer them back to the truth.

The show goes for laughs, but it also aims at something deeper. “It’s not like I want to rip on past presidents,” Waters says, “but I like reminding people that we’re all the same.”

And that’s ultimately Drunk History‘s message–beyond watch how much you drink. Waters says he learned that from his high-school history teacher, Gil Stange, who will have a cameo on the show later this season, and from the stories that the show’s tipsy narrators have told. “It’s a very cliché thing to say, but that’s what I’ve learned by doing the show and the people that I’ve been inspired by that we’ve learned about: They just stuck to their guns. And killed a lot of innocent people,” he says. “Just kidding.”

Write to Lily Rothman at lily.rothman@time.com and Julia Lull at julia.lull@time.com. 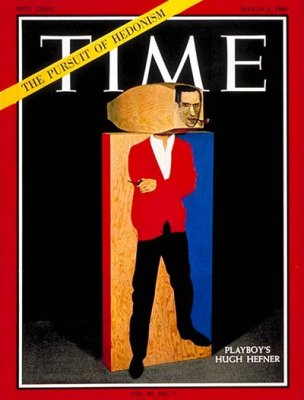 How Playboy's First Naked Centerfold Got Into the Magazine
Next Up: Editor's Pick